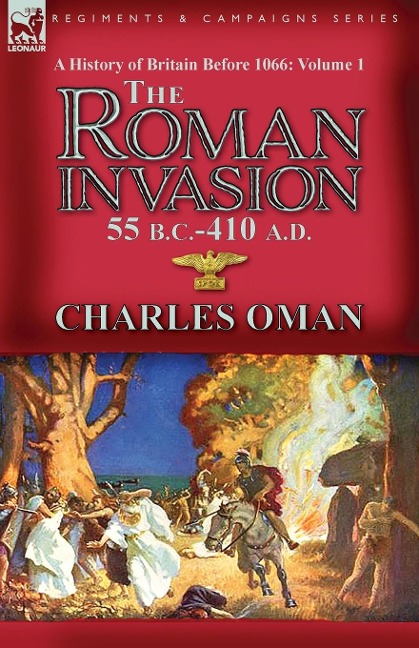 A History of Britain Before 1066-Volume 1

Vini Vidi Vici-Rome's struggles to take and hold Britain
Professor Charles Oman's exemplary credentials as an historian require no elaboration. His substantial volume of the history of Britain, covering a period of more than 1,000 years and culminating in the Norman Invasion of 1066, is a masterful, authoritative work on the subject. Mindful of the specialised interests of readers and students of history, Leonaur has divided that work into three separate books, each one of which concentrates on a troubled period in detail: The Roman Invasion, The Anglo-Saxon Invasion and The Danish Wars. The first volume, of course, commences with the military expeditions led by Julius Caesar in 55 B.C. and 54 B.C. In AD 43, four Roman legions set out to conquer Britain, which led to almost two decades of tribal warfare in England. Wars with Scottish tribes would embroil the empire for two centuries, before Barbarian incursions from the continent together with the decline of Rome itself eventually led to an end to Roman rule.
Leonaur editions are newly typeset and are not facsimiles; each title is available in softcover and hardback with dustjacket.