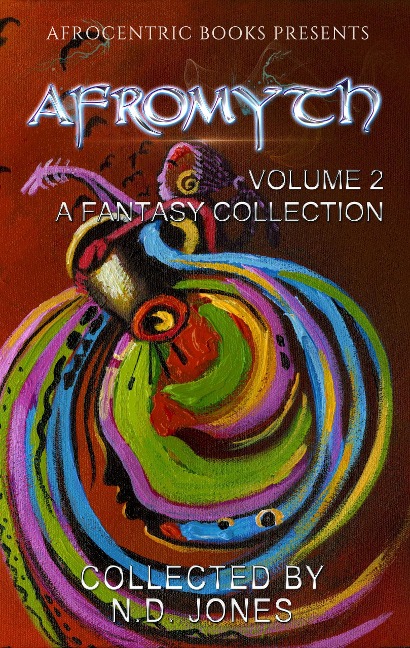 Afrocentric Books presents the second installment in the Afromyth Fantasy Series. This anthology features fourteen stories whose fantasy themes run the gamut from romance to horror. In the American antebellum South, an African god searches for his voice. In the far-flung future, a caravan of ships makes harbor in a Saharan sea. With the help of ancestral magic, a young boy learns what it takes to be a warrior, while a young girl learns to be a goddess. Afromyth volume 2 is an eclectic collection of tales, including those of a healer who unlocks an ancient power, a woman who rides the gods, and a god who rides a bike. Explore new worlds through the eyes of characters of indigenous African descent.

N. D. Jones, Ed.D is a USA Today bestselling author who lives in Maryland with her husband and two children. In her desire to see more novels with positive, sexy, and three-dimensional African American characters as soul mates, friends, and lovers, she took on the challenge herself. Along with the fantasy romance series, Forever Yours, and a contemporary romance trilogy, The Styles of Love, she has authored three paranormal romance series: Winged Warriors, Death and Destiny, and Dragon Shifter Romance. N.D. is also the founder of Kuumba Publishing, an art, audiobook, eBook, and paperback company that is a forum for creativity, with a special commitment to promoting and encouraging creative works from authors and artists of African descent. Her teenage daughter created the image design for Kuumba Publishing, while her son has written a role-playing game using original characters from a new paranormal romance series, and her husband manages the company—making Kuumba Publishing a true family affair.