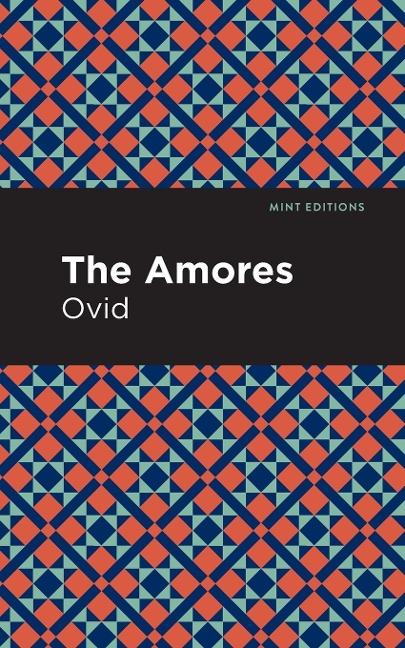 "The first taste I had for books came to me from my pleasure in the fables of the Metamorphoses of Ovid. For at about seven or eight years of age I would steal away from any other pleasure to read them, inasmuch as this language was my mother tongue, and it was the easiest book I knew and the best suited by its content to my tender age." -Michel de Montaigne

The Amores (16 BC) is a book of love elegies by Ovid. Divided into three books, The Amores was one of the Roman poet's first published works, an ambitious and often scorned attempt at achieving fame which tapped into the ancient tradition of romantic poetry while exhibiting its author's keen sense for outrage and social satire. Far from relatable, Ovid's poet-narrator is a caricature of the desperate lover, an example of what not to do in romance, or rather of how to guarantee public embarrassment for oneself and one's horrified friends and family.

At times serious, at others humorous, The Amores uses a mix of down-to-earth examples and relatable references to mythology in its dedicated portrayal of a man brought low with desire. Struck by Cupid himself, he longs for the lovely Corinna, a woman of higher class and of clearly higher grace. Despite his numerous efforts--begging at her door, threatening suicide, bribing her servants, and driving himself to the brink of insanity--the poet fails time and again to convince Corinna to be his constant companion. Consistently failing to use discretion, he illuminates the cruel and often one-sided nature of love, while also providing an unintentionally critical analysis of the role social class plays in policing desire. In passages ranging from the lofty to the bawdy, Ovid proves himself a poet on the doorstep of fame, a man both sure of his talent and desperate for success and affirmation.

With a beautifully designed cover and professionally typeset manuscript, this edition of Ovid's The Amores is a classic work of Roman literature reimagined for modern readers.

Ovid (43 BC-17/18 AD) was a Roman poet. Born in Sulmo the year after Julius Caesar's assassination, Ovid would join the ranks of Virgil and Horace to become one of the foremost poets of Augustus' reign as first Roman emperor. After rejecting a life in law and politics, he embarked on a career as a poet, publishing his first work, the Heroides, in 19 BC. This was quickly followed by his Amores (16 BC), a collection of erotic elegies written to his lover Corinna. By 8 AD, Ovid finished his Metamorphoses, an epic narrative poem tracing the history of Rome and the world from the creation of the cosmos to the death and apotheosis of Julius Caesar. Ambitious and eminently inspired, Metamorphoses remains a timeless work of Roman literature and an essential resource for the study of classical languages and mythology. Exiled that same year by Augustus himself, Ovid spent the rest of his life in Tomis on the Black Sea, where he continued to write poems of loss, repentance and longing.