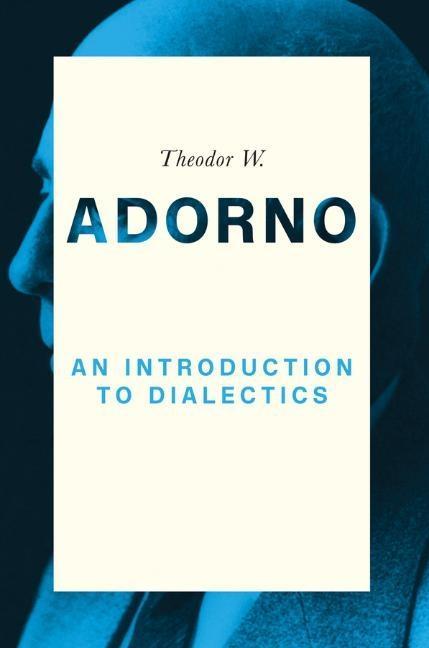 An Introduction to Dialectics

This volume comprises Adorno's first lectures specifically dedicated to the subject of the dialectic, a concept which has been key to philosophical debate since classical times. While discussing connections with Plato and Kant, Adorno concentrates on the most systematic development of the dialectic in Hegel's philosophy, and its relationship to Marx, as well as elaborating his own conception of dialectical thinking as a critical response to this tradition.

Delivered in the summer semester of 1958, these lectures allow Adorno to explore and probe the significant difficulties and challenges this way of thinking posed within the cultural and intellectual context of the post-war period. In this connection he develops the thesis of a complementary relationship between positivist or functionalist approaches, particularly in the social sciences, as well as calling for the renewal of ontological and metaphysical modes of thought which attempt to transcend the abstractness of modern social experience by appeal to regressive philosophical categories. While providing an account of many central themes of Hegelian thought, he also alludes to a whole range of other philosophical, literary and artistic figures of central importance to his conception of critical theory, notably Walter Benjamin and the idea of a constellation of concepts as the model for an 'open or fractured dialectic' beyond the constraints of method and system.

These lectures are seasoned with lively anecdotes and personal recollections which allow the reader to glimpse what has been described as the 'workshop' of Adorno's thought. As such, they provide an ideal entry point for all students and scholars in the humanities and social sciences who are interested in Adorno's work as well as those seeking to understand the nature of dialectical thinking.

Theodor Adorno (1903-1969), a prominent member of the Frankfurt School, was one of the most influential thinkers of the 20th century in the areas of social theory, philosophy and aesthetics.