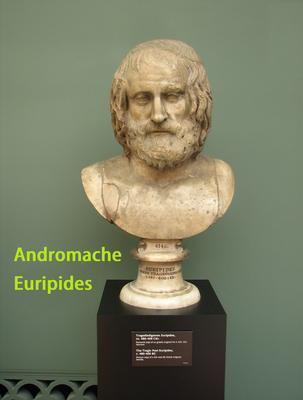 Andromache is an Athenian tragedy by Euripides. It dramatises Andromache's life as a slave, years after the events of the Trojan War, and her conflict with her master's new wife, Hermione. The date of its first performance is unknown, although scholars place it sometime between 428 and 425 BC.
Euripides was a tragedian of classical Athens. Along with Aeschylus and Sophocles, he is one of the three ancient Greek tragedians for whom a significant number of plays have survived. Some ancient scholars attributed 95 plays to him but, according to the Suda, it was 92 at most.