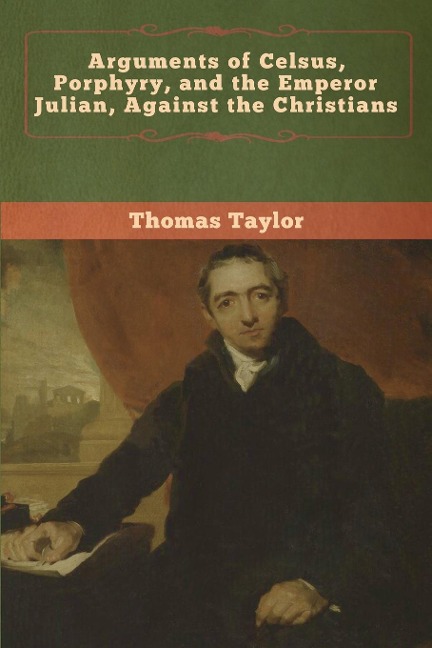 Arguments of Celsus, Porphyry, and the Emperor Julian, Against the Christians

Thomas Taylor (15 May 1758 - 1 November 1835) was an English translator and Neoplatonist, the first to translate into English the complete works of Aristotle and of Plato, as well as the Orphic fragments.
Thomas Taylor was born in the City of London on 15 May 1758, the son of a staymaker Joseph Taylor and his wife Mary (born Summers). He was educated at St. Paul's School, and devoted himself to the study of the classics and of mathematics. After first working as a clerk in Lubbock's Bank, he was appointed Assistant Secretary to the Society for the Encouragement of Art (precursor to the Royal Society of Arts), in which capacity he made many influential friends, who furnished the means for publishing his various translations, which besides Plato and Aristotle, include Proclus, Porphyry, Apuleius, Ocellus Lucanus and other Neoplatonists and Pythagoreans. His aim was the translation of all the untranslated writings of the ancient Greek philosophers.
Taylor was an admirer of Hellenism, most especially in the philosophical framework furnished by Plato and the Neoplatonists Proclus and the "most divine" Iamblichus, whose works he translated into English. So enamoured was he of the ancients, that he and his wife talked to one another only in classical Greek.
He was also an outspoken voice against corruption in the Christianity of his day, and what he viewed as its shallowness. Taylor was ridiculed and acquired many enemies, but in other quarters he was well received. Among his friends was the eccentric traveller and philosopher John "Walking" Stewart, whose gatherings Taylor was in the habit of attending.
Taylor also published several original works on philosophy (in particular, the Neoplatonism of Proclus and Iamblichus) and mathematics. These works have been republished (some for the first time since Taylor's lifetime) by the Prometheus Trust. (wikipedia.org)