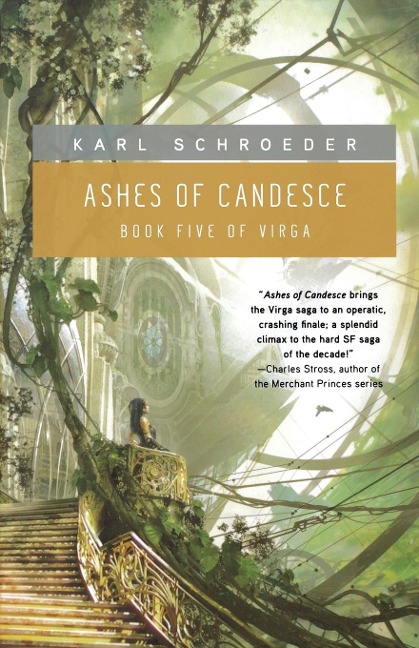 A world of endless sky, with no land, no gravity: this is Virga. Beginning in the seminal science fiction novel Sun of Suns, the saga of this striking world has introduced us to the people of stubborn pride and resilience who have made Virga their home; but also, always lurking beyond the walls of the world, to the mysterious threat known only as Artificial Nature. In The Sunless Countries, history tutor Leal Hieronyma Maspeth became the first human in centuries to learn the true nature of this threat. Her reward was exile, but now, in Ashes of Candesce, Artificial Nature makes its final bid to destroy Virga, and it is up to Leal to unite the quarrelling clans of her world to fight the threat.

Karl Schroeder's Ashes of Candesce brings together all the heroes of the Virga series, and draws the diverse threads of the previous storylines together into one climactic conflict. Blending steampunk styling with a far-future setting and meditations on the posthuman condition, Ashes of Candesce mixes high adventure and cutting-edge ideas in a fitting climax to one of science fiction's most innovative series.