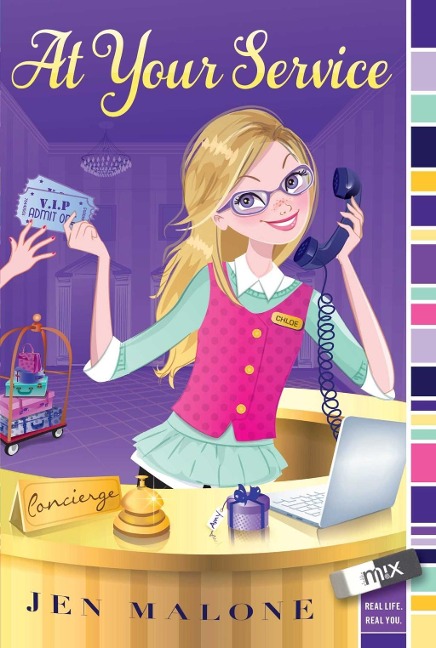 Chloe loves working as a junior concierge at an exclusive NYC hotel—but when three royal kids come to stay, her hospitality is put to the ultimate test!

Chloe Turner has pretty much the BEST life. She gets to live in the super fancy Hotel St. Michele. New York City is her hometown. And her dad, Mitchell Turner, concierge extraordinaire, is teaching her all the secrets of the business so she can follow in his footsteps. After helping him out with a particularly difficult kid client, Chloe is appointed the official junior concierge, tending to the hotel's smallest, though sometimes most demanding, guests.

Her new position comes with tons of perks like cupcake parties, backstage passes to concerts, and even private fittings with the hippest clothing designers. But Chloe hasn't faced her toughest challenge yet. When three young royals (including a real-life PRINCE!) come to stay, Chloe's determined to prove once and for all just how good she is at her job. Except the trip is a total disaster—especially when the youngest royal disappears. Now it's up to Chloe to save the day. Can she find the missing princess before it becomes international news?

Jen Malone is a former Hollywood publicist who once spent a year traveling the world solo, met her husband on the highway (literally), and went into labor with her identical twins while on a rock star's tour bus. These days she saves the drama for her books. Jen is also the author of the middle grade novels At Your Service and The Art of the Swap, coauthor of the You're Invited series, and wrote the YA novels Map to the Stars and Wanderlost. You can visit her online at JenMaloneWrites.com.