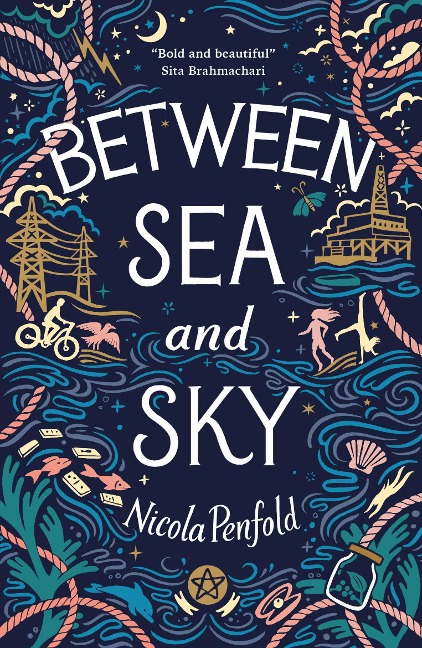 Between Sea and Sky

In a near future where a series of environmental disasters has left much of the country underwater, Pearl lives on a floating oyster farm with her father and younger sister, Clover. Following her mum's death several years earlier, Pearl refuses to set foot on land, believing her illness was caused by the poisons in the ground. Meanwhile, Clover dreams of school, friends and a normal life.

Then Nat comes to spend the summer at the sea farm while his scientist mum conducts some experiments. Leaving behind the mainland, with its strict rules and regulations, he brings with him a secret. But when the sisters promise to keep his secret safe, little do they realize that they may be risking everything...

A thrilling and thought-provoking ecological adventure from the author of the highly acclaimed WHERE THE WORLD TURNS WILD. Perfect for fans of THE EXPLORER, THE LAST WILD and WHERE THE RIVER RUNS GOLD.

PRAISE FOR WHERE THE WORLD TURNS WILD:

"A sense of the natural world's curative power runs through this adventurous story like a seam of gold." - Guardian

"Some books are excellent story-telling, and some books broaden your knowledge and mind, and some just ought to be written and this book is all three. I loved it." - Hilary McKay, author of THE SKYLARKS' WAR

"A brilliant adventure that pulls you headlong into Juniper and Bear's world, where survival depends upon finding the wild." - Gill Lewis, author of A STORY LIKE THE WIND

"Wondrous, warm-hearted, wildly exhilarating [...] The world is familiar and frightening, the relationships between characters beautifully rendered - Nicola Penfold is an author to watch." - Nizrana Farook, author of THE GIRL WHO STOLE AN ELEPHANT

Nicola Penfold was born in Merseyside and grew up in Doncaster. She studied English at Cambridge, before completing a Computing Science masters at Imperial College London. WHERE THE WORLD TURNS WILD was shortlisted for the first Joan Aiken Future Classics Prize in 2017. It was also selected for SCBWI's 2018 Undiscovered Voices anthology. Nicola lives with her husband, four children and two cats in North London, and escapes when she can to wilder corners of the UK for adventures.