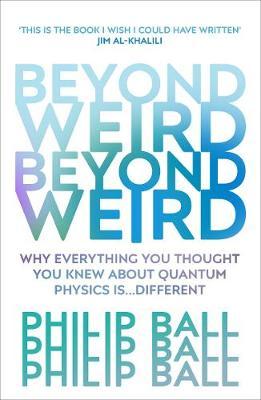 'A clear and deeply researched account of what's known about the quantum laws of nature, and how to think about what they might really mean' Nature

'I think I can safely say that nobody understands quantum mechanics.' Richard Feynman wrote this in 1965 - the year he was awarded the Nobel prize in physics for his work on quantum mechanics. Over the past decade, the enigma of quantum mechanics has come into sharper focus. We now realise that quantum mechanics is less about particles and waves, uncertainty and fuzziness, than a theory about information: about what can be known and how.

The quantum world isn't a different world: it is our world, and if anything deserves to be called 'weird', it's us. This exhilarating book is about what quantum maths really means - and what it doesn't mean.

'Gorgeously lucid...takes us to the edge of contemporary theorizing about the foundations of quantum mechanics... Easily the best book I've read on the subject' Washington Post

Philip Ball writes regularly in the scientific and popular media and worked for many years as an editor for physical sciences at Nature. His books cover a wide range of scientific and cultural phenomena, and include Critical Mass: How One Thing Leads To Another (winner of the 2005 Aventis Prize for Science Books), The Music Instinct, Curiosity: How Science Became Interested in Everything, Serving The Reich: The Struggle for the Soul of Science Under Hitler, Invisible: The History of the Unseen from Plato to Particle Physics and The Water Kingdom: A Secret History of China.