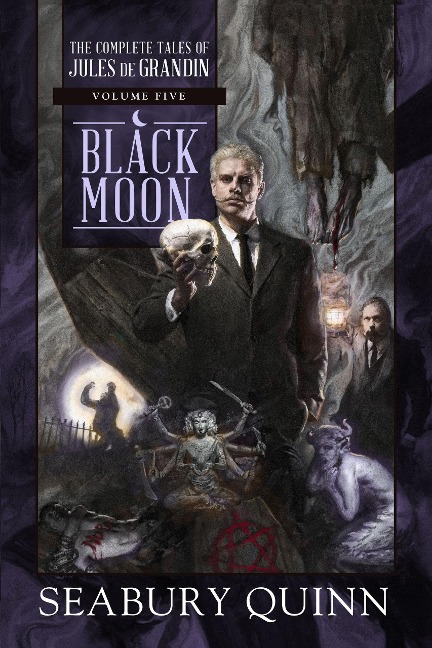 Today the names of H. P. Lovecraft, Robert E. Howard, August Derleth, and Clark Ashton Smith, all regular contributors to the pulp magazine Weird Tales during the first half of the twentieth century, are recognizable even to casual readers of the bizarre and fantastic. And yet despite being more popular than them all during the golden era of genre pulp fiction, there is another author whose name and work have fallen into obscurity: Seabury Quinn.

Available for the first time in trade editions, The Complete Tales of Jules de Grandin series collects all ninety-three published works featuring the supernatural detective. Presented in chronological order over five volumes, this is the definitive collection of an iconic pulp hero.

The fifth volume,Black Moon, includes all the stories from "Suicide Chapel" (1938) to "The Ring of Bastet" (1951), as well as an introduction by George Vanderburgh and Robert Weinberg and a foreword by Stephen Jones.

Praise for the Complete Tales of Jules de Grandin

"A fun, spooky trip back to the golden age of weird.... De Grandin, "his little blond mustache twitching like the whiskers of an excited cat," is an exuberant, delightful creation." -Publishers Weekly

"If you're a fan of classic pulp fiction stories that deal with mysterious and unexplained happenings, you'll love the Jules de Grandin stories!" -GeorgeKelley.org

Seabury Quinn was a pulp magazine author whose popular stories of the occult detective Jules de Grandin were published in Weird Tales between 1925 and 1951. Quinn penned ninety-two short stories and one full-length novel featuring 'the occult Hercule Poirot,' which were enormously popular with readers. Quinn lived in Washington, D.C., United States, and died in 1969.