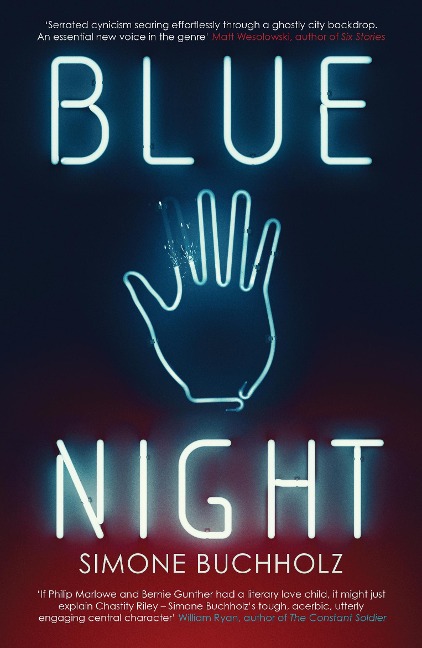 The hair stands up on the back of my neck and I get an age-old feeling in my belly. Like there's a fight ahead. Like something's really about to go off...

After convicting a superior for corruption and shooting off a gangster's crown jewels, the career of Hamburg's most hard-bitten state prosecutor, Chastity Riley, has taken a nose dive: she has been transferred to the tedium of witness protection to prevent her making any more trouble. However, when she is assigned to the case of an anonymous man lying under police guard in hospital - almost every bone in his body broken, a finger cut off, and refusing to speak in anything other than riddles - Chastity's instinct for the big, exciting case kicks in.
Using all her powers of persuasion, she soon gains her charge's confidence, and finds herself on the trail to Leipzig, a new ally, and a whole heap of lethal synthetic drugs. When she discovers that a friend and former colleague is trying to bring down Hamburg's Albanian mafia kingpin single-handedly, it looks like Chas Riley's dull life on witness protection really has been short-lived...
Fresh, fiendishly fast-paced and full of devious twists and all the hard-boiled poetry and acerbic wit of the best noir, Blue Night marks the stunning start of a brilliant new crime series, from one of Germany's bestselling authors.

'Stripped back in style and deadpan in voice, Blue Night is a scintillating romp around the German criminal underworld and back' Doug Johnston, The Big Issue

'By turns lyrical and pithy, this adventure set in the melting pot of contemporary Hamburg has a plot and a sensibility that both owe something to mind-altering substances. Lots of fun' Times Crime Club

'Simone Buchholz writes with real authority and a pungent, noir-is sense of time and space. Blue Night is a palpable hit' Barry Forshaw

'By turns lyrical and pithy, this adventure set in the melting pot of contemporary Hamburg has a plot and a sensibility that both owe something to mind-altering substances. Disgraced state prosecutor Chastity Riley chases round the dive bars of the port city pursuing and being pursued by a beguiling cast of cops, criminals and chums, delivering scalding one-liners as she goes. Lots of fun' Times Crime Club

'Blue Night has great sparkling energy, humour and stylistic verve ... and the story itself is gripping and pacey' Rosie Goldsmith, European Literature Network

'A must-read, stylish and highly original take on the detective novel, written with great skill and popping with great characters' Judith O'Reilly, author of Killing State

'Constantly surprising, Blue Night is an original, firecracker of a read' Liz Robinson

'Blue Night has great sparkling energy, humour and stylistic verve ... and the story itself is gripping and pacey' Rosie Goldsmith, European Literature Network

Simone Buchholz was born in Hanau in 1972. At university, she studied Philosophy and Literature, worked as a waitress and a columnist, and trained to be a journalist at the prestigious Henri-Nannen-School in Hamburg. In 2016, Simone Buchholz was awarded the Crime Cologne Award as well as the second Place of the German Crime Fiction Prize for Blue Night, which was number one on the KrimiZEIT Best of Crime List for months. She lives in Sankt Pauli, in the heart of Hamburg, with her husband and son.
Follow Simone on Twitter @ohneKlippo and visit her website: simonebuchholz.com

The World of Carolus Clusius

I, Who Did Not Die