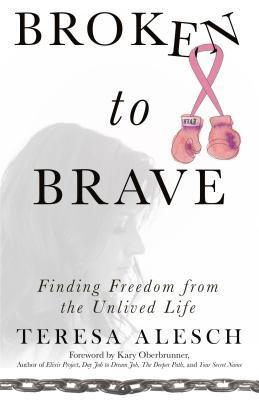 Finding Freedom from the Unlived Life

EVERYONE HAS A BATTLE.

You get the one you need...

Choose BRAVE. Choose to be... YOU.

While the chemo dripped, Teresa shivered as she replayed the words, "you have cancer." A wife, mother, and school principal, her life would irrevocably change in ways more damaging than the chemical toxins pumping into her veins. From a prison cell of vulnerability and with humor and poise, Teresa shares her roller coaster ride from hopeless imprisonment through cancer, loss and depression, self-sabotage, and suicide to courageous freedom from her unlived life.

Broken to Brave challenges you to consider

If you or a loved one are chained in a prison of an unlived life, Teresa helps you

TERESA ALESCH, author, Hometown Hawkeye, and PK-12 Iowa education administrator, is a "life-winning" cancer fighter. Her mission is to empower you to unlock your BRAVE by being resilient, intentional, and courageous in the midst of life's adversities. Her battles with cancer and loss and her walk through the aftermath revealed keys to finding perfection in imperfection.

In her book, Broken to Brave: Finding Freedom from the Unlived Life, Teresa walks readers through her private journey and reveals the greatest key to surviving was finding her faith, understanding God's love, and accepting His blessing. Teresa teaches you to find your own keys to free yourself to appreciate the past, focus the future, and be mindful and purposeful in the present.

A former 6-12 school principal, Teresa currently serves as a special education regional administrator. Her passion for student and adult learners drives her work with schools and communities. She partners with organizations to promote a growth mindset and improve education and mental/emotional health models for students.

Teresa is a John Maxwell Team coach, speaker, and trainer, a tribe member of Igniting Souls, a founding member of Courageously Free Women, a women's ministry to inspire and encourage women in their journey of Christ-centered living, and With Eyes Wide Open, a group of Christian authors who have united to passionately take on worldly views with truth and light

Teresa and her husband Cody, a college wrestling coach, educate and challenge young and wise minds to be better today than yesterday. They are blessed with two competitive, spunky, and brave children who-spitting images of their parents-keep them on their toes...and laughing.

INTRODUCTION: Framing the Prisoner to THE END

Chapter 1: That Dreaded Phone Call-Am I Going to Prison?

Just a MUSE to Paint a Picture

Chapter 3: Life Before Prison-From Chemo to Who am I?

Chapter 4: Cancer Robbed Me-Yet I Was the One with the Sentence

Chapter 5: The Lineup and Fingerprinting-How in the HELL Did I Get HERE?!?!

Chapter 6: Preparing for Court, for Battle-an Army of Supporters at My Flank

Part 2: Between Blind and Confident

Chapter 7: Forced Into Two Interrogation Rooms-Teresa's Dad Had a Stroke

Chapter 8: We May As Well Go for a Ride-May I Bring My Own Straitjacket?

Chapter 9: Uncle! Uncle! Stop the Ride Already! Please Just Give Me Back My Life!

Chapter 11: Life is a Ride-Fear is a Cell

Chapter 12: It Takes a Village to Fight Cancer-We Prepare for War

Chapter 13: From Chemotherapy Completion to Freedom-DENIED

Chapter 14: Imagining Prison Life-Dancing in the Rain with Damaged Goods

Chapter 16: The Prison Cell is Locked with Pain and Heartbreak

Chapter 17: Accepting Prison-Experiencing the Pain to Better Appreciate the Destination?

Chapter 19: Once Cell from Solitary

Chapter 20: Life after Cancer-Anything but Free

Part 4: Beaten and Broken but Constant

Chapter 22: Prison News: From Principal, to Baby News, to Hell on Earth

Chapter 24: Every 15 Minutes…a Heart is Broken

Chapter 33: Retreating into the Dark Corner of a Cell

Part 5: To Be Brave and Courageous

Chapter 38: One of God's Angels

Chapter 39: All I Had to Do Was Ask-Keys