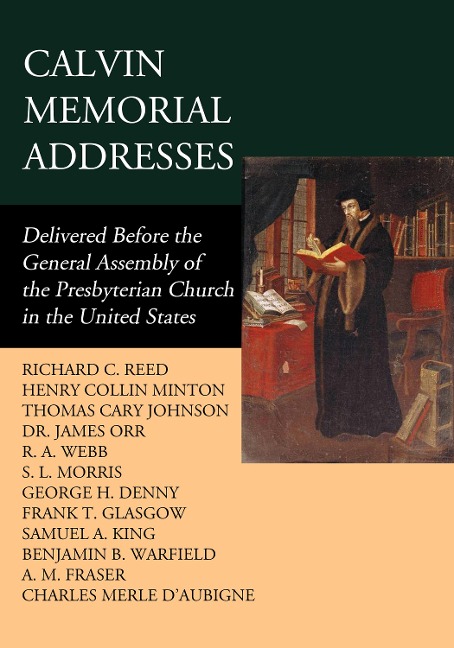 The General Assembly of the Presbyterian Church in the United States in session at Birmingham, Ala., May, 1907, received from the Executive Commission of the Alliance of Reformed Churches throughout the world holding the Presbyterian System, the following communication relative to a general observance of the 400th Anniversary of the birth of John Calvin:

"The Executive Commission draws the attention of the churches in the Alliance and of all lovers of true progress to the approaching Four Hundredth Anniversary of the birth of John Calvin. The Reformer was born at Noyon, Picardy, France, July 10, 1509. His life was lived during one of the most important and crucial epochs of human history. In the providence of God he was one of the most potent forces of his day for human progress, and his influence continues in the present, and will abide in the future, a great power for the welfare of mankind. Men of all classes of thought and of all nations recognize his greatness. Particularly was he influential in setting in motion those forces which have resulted in the formation of the American nation. Great historians speak of him as the founder of the United States. While thus connected, however, with the American Republic, the great Genevan had and has a vital relation to all Christian nations. No man of his age has been more influential in securing civil and religious liberty, the development of popular government, the secular progress of man, the reformation of the Christian Church, the development of religious thought along true lines, and the general advance of the Kingdom of God in the world. It is recommended:

That the Supreme Judicatories of the Churches in the Alliance be requested and urged to take steps for the general observance by all their congregations of the four hundredth anniversary of the birth of John Calvin.

Overtures were received from thirteen presbyteries to the same effect.

The Assembly of 1908, in session at Greensboro, N. C., took the following action, in accordance with the recommendation of the ad interim committee:

"The General Assembly, recognizing the historic significance of this anniversary, and the unusual opportunity afforded thereby for the vindication, propagation and inculcation of the great principles of the Reformed Faith, which lie at the foundation of civil and religious liberty, and earnestly desiring, along with sister churches of the same faith and order throughout the world,

Occasion by the hand and make

The bounds of freedom wider yet,"

adopts the following plan looking to the general observance of the Calvin Quadricentennial by the Presbyterian Church in the United States.