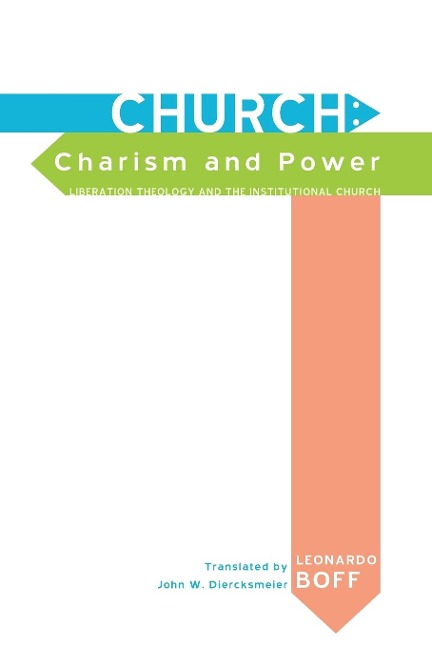 Description:
Why the furor over this book? Why was Church: Charism and Power the subject of a Vatican inquiry? The reason, ironically enough, has little to do with its alleged use of Marxist thought, but rather with its critical understanding of the church in the light of the gospel. Church: Charism and Power is a provocative, devastating critique of the ways in which power, sacred power, is controlled and exercised in the Roman Catholic Church. It is a militant book, a radical book, but it is by no means defective in orthodoxy. In fact, with all its criticism it offers a brilliant defense of the historical claims of Roman Catholicism.

Its central thesis argues that since the fourth century the church has fallen victim to a kind of power that has nothing to do with the gospel and everything to do with the dynamics of power with all of its inevitable abuses. This historical reality, enshrined in the monarchical model of the church, was undermined at the Second Vatican Council and replaced by that of the church as people of God. This 'laical' model is closely allied in Boff's exposition with the notion of the church as sacrament of the Holy Spirit: the church as "sign and instrument of the now living and risen Christ, that is the Holy Spirit." A pneumatic ecclesiology such as this would lead the church back to its primitive dynamics of community, cooperation, and charism. It would create a church in which everyone shared equally and where flexible and appropriate ministries conformed to needs as they arose. Is such a church possible? Is it not simply the utopian dream of idealists and sectarians down through the ages? No, says Father Boff, given the incredible growth throughout Latin America of comunidades eclesiales de base, base communities, where the people express and achieve their desire for participation and where the hierarchy divests itself of its titles and ecclesiastical baggage, creating a common desire for community and equality. This model of the church has acquired an unexpected historical possibility: the new church is in the process of being born. This church, the church being born from the faith of the poor, has rediscovered for itself--and for the church universal--the living presence of the dangerous memory of Jesus Christ.

About the Contributor(s):
Leonardo Boff was born in Brazil in 1938 and received a doctorate from the University of Munich in Germany in 1970. For the following twenty years, he worked as Professor of Theology at the Franciscan School for Philosophy and Theology in Petropolis, Brazil. During the 1970s, he and Gustavo Gutiérrez helped to define liberation theology. Since 1993 he has been a professor at the State University of Rio de Janeiro, where he is now Emeritus Professor of Ethics, Philosophy of Religion, and Ecology. He is also a member of the international Earth Charter Commission. Boff is the author of more than seventy books, including Saint Joseph: The Father of Jesus in a Fatherless Society. In 2001 he was awarded the Right Livelihood Award (which is considered to be the "alternative" Nobel Prize) by the Swedish Parliament.