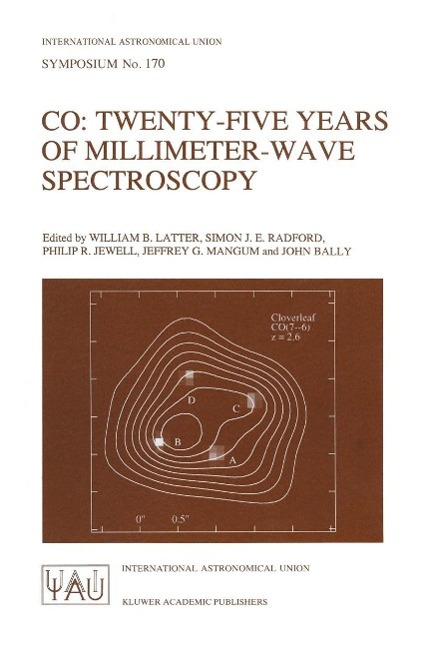 Proceedings of the 170th Symposium of the International Astronomical Union, Held in Tucson, Arizona, May 29-June 5, 1995

Interstellar carbon monoxide (CO) was first detected in 1970 with the 36 foot diameter telescope of the National Radio Astronomy Observatory! on Kitt Peak in Southern Arizona. R. W. Wilson, K. B. Jefferts, and A. A. Penzias of Bell Labs reported, "We have found intense 2.6 mm line radiation 2 from nine Galactic sources which we attribute to carbon monoxide." Soon afterward, several other basic molecules were also observed in space. IAU Symposium 170, CO: Twenty Five Years of Millimeter Wave Spectroscopy, was organized to commemorate those discoveries. The Symposium reviewed the accomplishments of a quarter century of research on interstellar molec­ ular gas, surveyed the current state of millimeter-wave spectroscopy, and gave a glimpse of what the next 25 years might hold. Studies of interstellar CO have revolutionized our understanding of the phases and dynamics of the interstellar medium, the initial and final stages of stellar evolution, the chemistry of dense and diffuse interstellar matter and of the solar system, the structure of the Milky Way galaxy, and the content and structure of other galaxies, some very distant. Spectroscopic studies of CO and other molecules are primary tools for investigating all these topics, which are among the most fundamental and active research areas in astrophysics. New developments in instrumentation, including sev­ eral powerful new telescopes, continue to keep millimeter and submillimeter wavelength radio astronomy at the forefront of research.