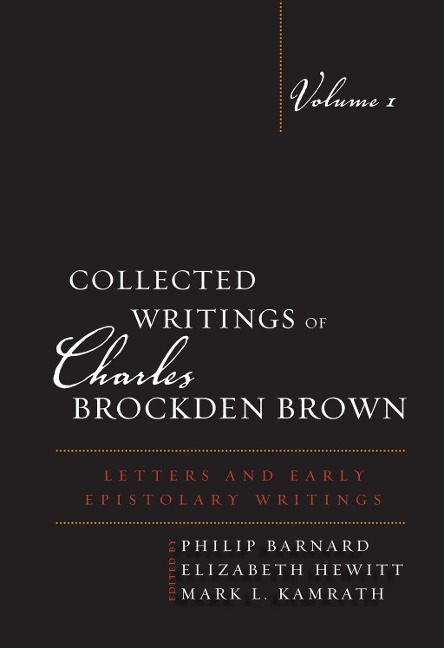 Charles Brockden Brown (1771-1810) is a key writer of the revolutionary era and U.S. early republic, known for his landmark novels and other writings in a variety of genres. The Collected Writings ofCharles Brockden Brown presents all of Brown's non-novelistic writings-letters, political pamphlets, fiction, periodical writings, historical writings, and poetry-in a seven-volume scholarly edition. The edition's volumes are edited to the highest scholarly standards and will bear the seal of the Modern Language Association Committee on Scholarly Editions (MLA-CSE).

Letters and Early Epistolary Writings, volume 1 of the series, presents, for the first time, Brown's complete extant correspondence along with three early epistolary fiction fragments. Brown's 179 extant letters provide essential context for reading his other works and a wealth of information about his life, family, associates, and the wider cultural life of the revolutionary period and Early Republic. The letters document the interactions of Brown's intellectual and literary circles in Philadelphia and during his New York years, when his publishing career began in earnest. The correspondence additionally includes exchanges with notables including Thomas Jefferson and Albert Gallatin. The volume's three epistolary fragments are the earliest examples of Brown's fiction and are transcribed here for the first time in complete and definitive texts.

The volume's historical texts are fully annotated and accompanied by Historical and Textual Essays, as well as other appended materials, including the most complete and accurate information available concerning Brown's correspondents and family history. The scholarly work informing this volume establishes significant new findings concerning Brown, his family and friends, and the circumstances of his development as a major literary figure of the revolutionary Atlantic world.