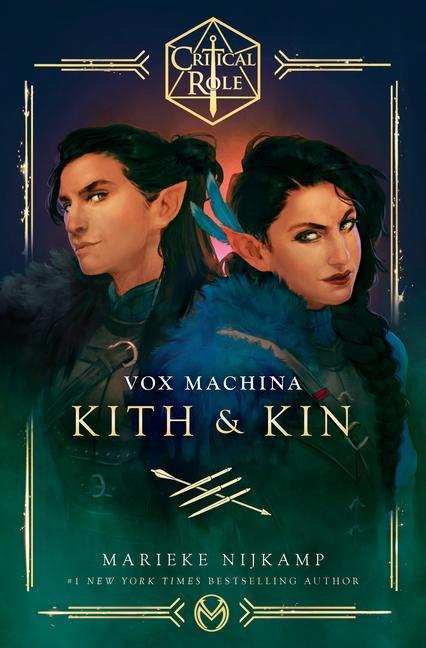 Written by #1 New York Times bestselling author Marieke Nijkamp, Critical Role: Vox Machina - Kith & Kin will follow a brand-new story, featuring the cunning ranger Vex'ahlia and the conning rogue Vax'ildan (and, of course, Trinket) years before they meet Vox Machina. After leaving the unwelcoming refuge of Syngorn, the twins become entangled in a web spun by the Clasp, and for the first time Vex and Vax find themselves on opposite sides of a conflict that threatens the home they have carried with each other for years.

Marieke Nijkamp is a #1 New York Times bestselling author of YA novels, graphic novels, and comics, including This Is Where It Ends, Before I Let Go, Even If We Break, and The Oracle Code. Her short stories can be found in several anthologies. She also edited the anthology Unbroken: 13 Stories Starring Disabled Teens. Marieke is a storyteller, dreamer, globe-trotter, and geek. Before pursuing her lifelong passion for writing, she majored in philosophy and medieval history. She loves to go on adventures, roll dice, and daydream. She lives and writes in Small Town, The Netherlands.

Critical Role is the most popular story-driven and worldbuilding digital media brand in the world. While it started off as a roleplaying game between a group of friends in 2012, Critical Role has since evolved into a multiplatform entertainment phenomenon that has branched out into a variety of shows and endeavors, including the flagship show Critical Role, comic books, animation, live performances, podcasts, fan art, graphic novels, multiple books on the New York Times bestseller list, philanthropy through Critical Role Foundation, original tabletop game publishing through Darrington Press, and more. A passionate and engaged community tunes in each week to watch their favorite storytellers take on new adventures led by veteran voice actor Matthew Mercer and composed of other well-known voice actors Ashley Johnson, Marisha Ray, Taliesin Jaffe, Travis Willingham, Sam Riegel, Laura Bailey, and Liam O'Brien. Engrossed in the stories, characters, and camaraderie, over half a million regular viewers watch every week and hundreds of thousands more per month continue to discover Critical Role for the first time.