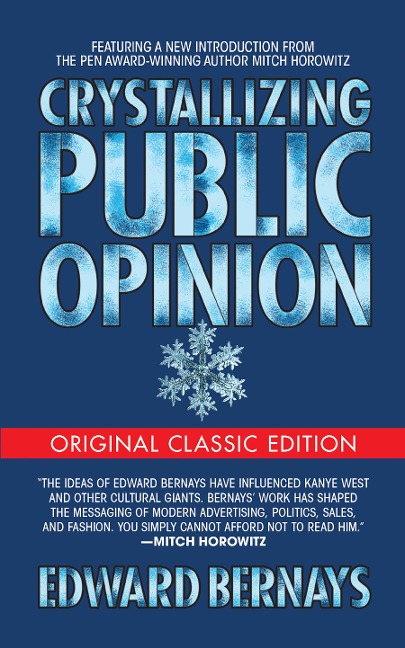 A seminal work on how public opinion is created and shaped, Edward Bernays' 1923 classic Crystallizing Public Opinion set down the principles that corporations and government have used to influence public attitudes over the past century.

With his view that the public behaves like herds of animals, Bernays outlines how to control the masses in whatever way the influencer chooses. With a glimpse into the world of propaganda and advertising, he shows how ideas as different as eating bacon for breakfast and preferring women to be thin were put into our heads.

By adapting the ideas that Bernays put forth in this book, governments and advertisers have been able to "regiment the mind." Bernays' work explains a large part of the popularity of today's TV news shout-fest and angry social media posts. Bernays wrote, "crowds love a contest." This dynamic fuels the hostile and sarcastic comment chains that populate Twitter and Facebook and taps into what Bernays called "the 'herd' point of view," which results in mass audiences, mass products and mass-media events.

Bernays was named as one of the 100 most influential Americans of the 20th Century by Life magazine. He counted among his clients the American Tobacco Company, several U.S. presidents and the opponents of the Guatemalan revolution.