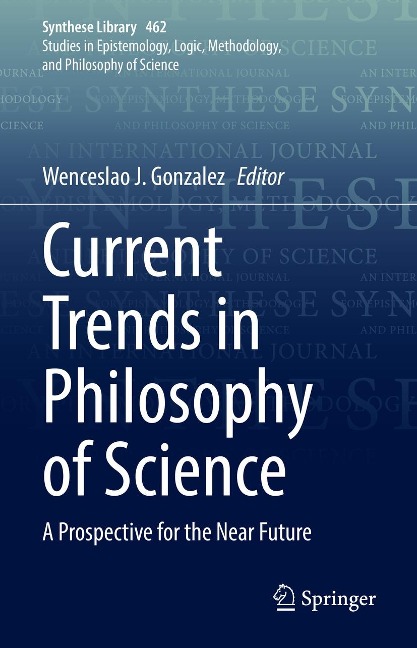 Current Trends in Philosophy of Science

A Prospective for the Near Future

This book seeks to provide new perspectives, to broaden the field of philosophy of science, or to renew themes that have had a great impact on the profession. Thus, after an initial chapter to situate the current trends in philosophy of science and the prospective of the near future, it offers contributions in five thematic blocks: I) Philosophy of Medicine and Climate Change; II) Philosophy of Artificial Intelligence and the Internet; III) New Analyses of Probability and the Use of Mathematics in Practice; IV) Scientific Progress Revisited; and V) Scientific Realism and the Instrumentalist Alternative.

Within this framework, the volume addresses such relevant issues as the methodological validity of medical evidence or decision making in situations of uncertainty; recent advances in Artificial Intelligence and the future of the Internet; current forms of empirically based methodological pluralism and new ways of understanding mathematics with scientific practice; and the revision of the approaches to scientific progress based on the experiences accumulated in recent decades.

Wenceslao J. Gonzalez is Professor of Logic and Philosophy of Science (University of A Coruña). He is a Full Member of the Académie International de Philosophie des Sciences/International Academy for Philosophy of Sciences. He has been a Team Leader of the European Science Foundation program entitled "The Philosophy of Science in a European Perspective" (2008-2013). He has been named a Distinguished Researcher by the Main National University of San Marcos in Lima (Peru). He has been a member of the National Committee for Evaluation of the Scientific Activity of Spain. Gonzalez has been a visiting researcher at the Universities of St. Andrews, Münster and London (LSE, CPNSS), as well as Visiting Fellow at the Center for Philosophy of Science and Visiting Scholar of the Department of Philosophy (U. Pittsburgh). He has given lectures at the Universities of Pittsburgh, Stanford, Quebec in Montreal, Helsinki and Nevada at Reno. The conferences in which he has participated include those organized by the Universities of Uppsala, New South Wales, Bologna, Canterbury (NZ), Vienna, Beijing, Harvard and Boston. He received the Research Award in Humanities given in 1995 by the Autonomous Community of Galicia (Spain). He was President of the Committee of Doctoral Programs at the University of A Coruña (2002-2004). His publications include monographs such as Philosophico-Methodological Analysis of Prediction and its Role in Economics (Springer, 2015) and the edition of 41 volumes on philosophy of science, such as Bas van Fraassen's Approach to Representation and Models in Science (2014).

1. From the Current Trends in Philosophy of Science to the Prospects for the Near Future
Wenceslao J. Gonzalez
Part I. Philosophy of Medicine and Climate Change
2. Philosophy of science meets medicine (again): a clearer-sighted view of the virtues of blinding and of tests for blinding in clinical trials
John Worrall
3. Environmental decision-making under uncertainty
Joe Roussos, Richard Bradley, and Roman Frigg
Part II. Philosophy of Artificial Intelligence and the Internet
4. Artificial Intelligence and Philosophy of Science from the 1990s to the early 2020s
Donald Gillies and Marco Gillies
5. Whatever happened to the logic of discovery? From transparent logic to alien reasoning
Thomas Nickles
6. Scientific Side of the Future of the Internet as a Complex System. The Role of Prediction and Prescription of Applied Sciences
Wenceslao J. Gonzalez
Part III. New Analyses of Probability and the Use of Mathematics in Practice
7. From Logical to Probabilistic Empiricism: Arguments for Pluralism
Maria Carla Galavotti
8. Instrumental Realism -- A New Start for Mathematics and Scientific Practice
Ladislav Kvasz
Part IV. Scientific Progress Revisited
9. Scientific Progress and the Search for Truth
Philip Kitcher
10. The Logic of Qualitative Progress in Nomic, Design, and Explicative Research
Theo Kuipers
Part V. Scientific Realism and the Instrumentalist Alternative
11. Explicating Inference to the Best Explanation
Ilkka Niiniluoto
12. Re-inflating the Realism-Instrumentalism Controversy
Stathis Psillos
Index of Names
Subject Index