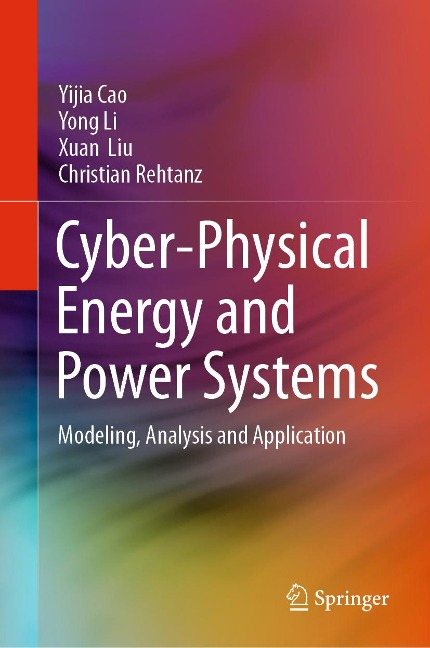 This book discusses recent advances in cyber-physical power systems (CPPS) in the modeling, analysis and applications of smart grid. It introduces a series of models, such as an analysis of interaction between the power grid and the communication network, differential protection in smart distribution systems, data flow for VLAN-based communication in substations, a co-simulation model for investigating the impacts of cyber-contingency and distributed control systems as well as the analytical techniques used in different parts of cyber physical energy systems. It also discusses methods of cyber-attack on power systems, particularly false data injection. The results presented are a comprehensive summary of the authors' original research conducted over a period of 5 years. The book is of interest to university researchers, R&D engineers and graduate students in power and energy systems.

Yijia Cao received the undergraduate degree from Xi'an Jiaotong University, Xi'an, China, in 1988, and the M.Sc. and Ph.D. degrees from the Huazhong University of Science and Technology (HUST), Wuhan, China, in 1991 and 1994, respectively. From 1994 to 2000, he was a Visiting Research Fellow and a Research Fellow with Loughborough University, Liverpool University, and the University of the West England, U.K. From 2000 to 2001, he was a Full Professor with HUST, and from 2001 to 2008, he was a Full Professor with Zhejiang University, China, where he was appointed as the Deputy Dean of the College of Electrical Engineering in 2005. He is currently a Full Professor and the Vice President of Hunan University, Changsha, China. Dr. Cao is an Associate Editor of IET Cyber-Physical Systems: Theory & Applications. His main research interests are smart grid dispatch, power system security and stability control, and the application of intelligent systems in power systems.

Yong Li received the B.Sc. degrees in 2004 from Hunan University, Changsha, China, where he performed the Ph.D. study due to December 2008. Since 2009, he worked as a research associate at the Institute of Energy Systems, Energy Efficiency and Energy Economics (ie3), TU Dortmund University, Dortmund, Germany, where he received his second Ph.D. degree in 2012. Since September 2012, he is a Research Fellow with The University of Queensland, Brisbane, Australia. Currently, he is a Full Professor of electrical engineering with Hunan University. Dr. Li is a member of the Editorial Board of IET Generation, Transmission, and Distribution and an Associate Editor of IET Power Electronics. His main research interests include power system stability analysis and control, ac/dc energy conversion systems and equipment, analysis and control of power quality, and HVDC and FACTS technologies.
Xuan Liu is is a professor at the College of Electrical and Information Engineering, Hunan University. His main research interests include power systems operation, optimization and security analysis.
Christian Rehtanz received the Diploma degree in electrical engineering in 1994 and the Ph.D. degree in 1997 from the TU Dortmund University, Dortmund, Germany. In 2000, he was with ABB Corporate Research, Switzerland and in 2003, he was the Head of Technology of the Global ABB Business Area Power Systems. In 2005, he was the Director of ABB Corporate Research in China. Since 2007, he has been a Full Professor and the Head of Institute of Energy Systems, Energy Efficiency and Energy Economics, TU Dortmund University. His research activities include technologies for transmission and distribution network enhancement and congestion relief like stability assessment, wide-area monitoring, protection, and coordinated FACTS- and HVDC-control.