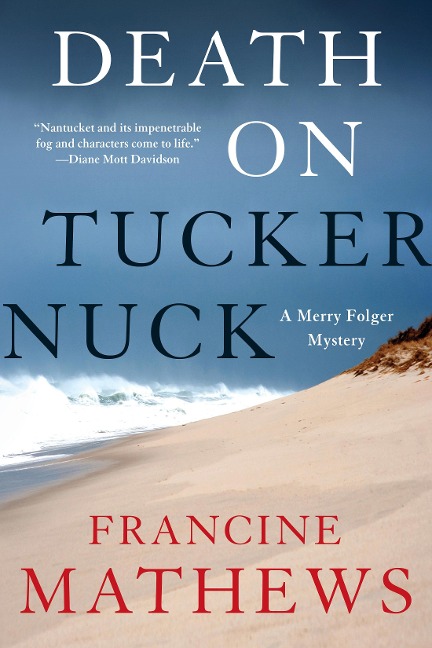 In  the Category 3 winds of a late-season hurricane, Nantucket police  detective Merry Folger and her team attempt a rescue off the secluded  island of Tuckernuck-only to discover a deadly secret.

As a Category 3 hurricane bears down on Nantucket, Dionis Mather and her father have their work cut out for them. Their family business is to ferry goods and people back and forth from Tuckernuck, the private island off Nantucket's western tip, a place so remote and exclusive that it is off the electric grid. As caretakers of the small plot of sand in the middle of the Atlantic, the Mathers are responsible for evacuating Tuckernuck's residents, who range from a stubborn elderly native who refuses to leave her family home to the abandoned summer house pets of an absentee NFL quarterback. But as the storm surge rises and the surf warnings mount, Dionis has to make a choice: abandon whatever-or whoever-was left behind, or risk her own life by plunging back into the maelstrom. Even she has no idea what evil the hurricane is sheltering.

When the coast guard notifies the Nantucket police of a luxury yacht grounded in the shoals off Tuckernuck's northern edge-with two shooting victims lying in the main cabin-detective Meredith Folger throws herself into an investigation before the hurricane sweeps all crime-scene evidence out to sea. Merry is supposed to be on leave this weekend, dancing at her own wedding, but the Cat 3 has thrown her blissful plans into chaos. As her battered house fills with stranded wedding guests and flood waters rise all over Nantucket Island, Merry has her own choice to make: How much should she risk in order to bring a criminal to justice?

Francine Mathews has spent part of fifty summers on Cape Cod and Nantucket. She attended Princeton and Stanford Universities, where she studied history, before going on to work as an intelligence analyst at the CIA. She wrote her first book in 1992 and left the Agency a year later. Since then, she has written twenty-seven books, including four previous novels in the Merry Folger series (Death in the Off-Season, Death in Rough Water, Death in a Mood Indigo, Death in a Cold Hard Light, and Death on Nantucket) as well as the nationally bestselling Being a Jane Austen mystery series, which she writes under the pen name Stephanie Barron. She lives and works in Denver, Colorado.