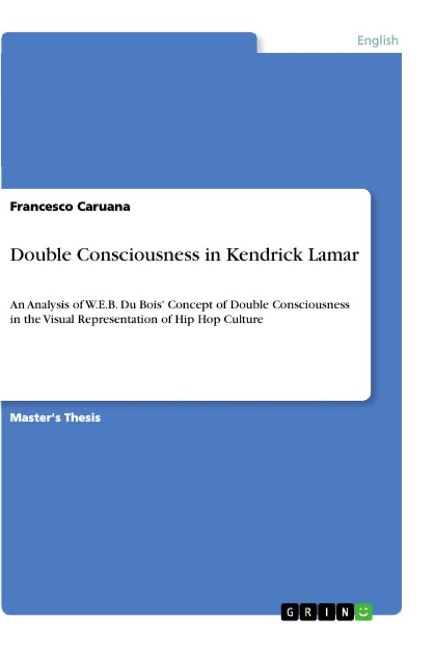 An Analysis of W.E.B. Du Bois' Concept of Double Consciousness in the Visual Representation of Hip Hop Culture

Master's Thesis from the year 2015 in the subject English Language and Literature Studies - Culture and Applied Geography, grade: 1,5, University of Tubingen (Institut für Literaturwissenschaft), course: Staatsexamen, language: English, abstract: Throughout this paper the question is going to be answered, whether W.E.B. Du Bois' concept of double consciousness can be discerned in contemporary expressions of Hip Hop culture. Furthermore, it is going to be explored how this concept can be visually represented by analyzing Kendrick Lamar's music video to the song Alright from the Album To Pimp a Butterfly. First, a definition of Du Bois' concept of double consciousness is going to be given in order to delineate the characteristics and possible interpretations of it. The concept is going to be defined as an internal conflict that expresses the hardship of reconciling two distinct perspectives and identities into one body. Moreover, formal aspects of The Souls of Black Folk are going to provide evidence for the argument, that Du Bois writing style facilitates the communication of the concept of double consciousness throughout his work. The effects of double consciousness and the importance of cultural expressions in the process of finding one's own cultural identity are also going to be analyzed in more detail in the second chapter of this paper.

The Souls of Black Folk