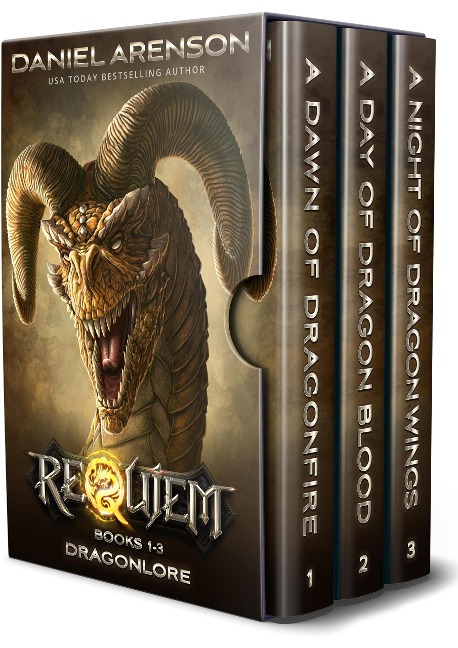 Dragonlore, an epic fantasy trilogy, tells the story of Requiem -- an ancient kingdom whose people can grow wings, breathe fire, and take flight as dragons. This collection includes all three Dragonlore novels.

Book 1: A Dawn of Dragonfire -- Queen Solina, a desert tyrant, leads an army of phoenixes. She invades Requiem, vowing to destroy it. Requiem's people can become dragons, but how can they defeat the phoenixes, beasts woven of sunfire?

Book 2: A Day of Dragon Blood -- Solina raises new champions: the wyverns, creatures of iron scales and leathern wings. From their maws spews acid to eat through stone, steel, and dragon flesh. When the wyverns attack, can Requiem survive?

Book 3: A Night of Dragon Wings -- Vowing to kill every dragon, Solina summons her greatest warriors: the nephilim, the spawn of demons and their mortal brides. As ancient evil engulfs the world, Requiem's dragons roar, blow their fire, and fly to their last stand.

Dragonlore
Book 1: A Dawn of Dragonfire
Book 2: A Day of Dragon Blood
Book 3: A Night of Dragon Wings

The Dragon War
Book 1: A Legacy of Light
Book 2: A Birthright of Blood
Book 3: A Memory of Fire