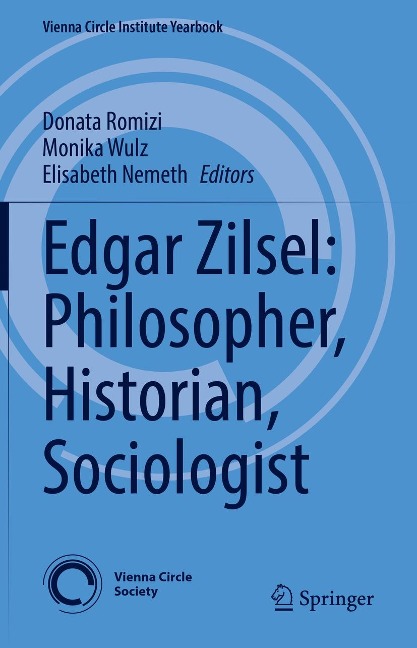 This book provides a new all-round perspective on the life and work of Edgar Zilsel (1891-1944) as a philosopher, historian, and sociologist. He was close to the Vienna Circle and has been hitherto almost exclusively referred to in terms of the so-called "Zilsel thesis" on the origins of modern science. Much beyond this "thesis", Zilsel's brilliant work provides original insights on a broad number of topics, ranging from the philosophy of probability and statistics to the concept of "genius", from the issues of scientific laws and theories to the sociological background of science and philosophy, and to the political analysis of the problems of his time. Praised by Herbert Feigl as an "outstanding brilliant mind", Zilsel, being as a Social-Democrat of Jewish origins, mostly led a life of hardship marked by emigration and coming to a sudden and tragic end by suicide in 1944. The impossibility of an academic career has hindered the reception of Zilsel's scientific work for a long time. This volume is a contribution to its late reception, providing new insights especially into his work during his years in Vienna; moreover, it shows the heuristic value of Zilsel's ideas for future scholarly research - in philosophy, history, and sociology.

Donata Romizi has studied Philosophy at the University of Bologna (where she also attended the interdisciplinary "Collegio Superiore") and at the University of Vienna (PhD, 2013). She now works at the University of Vienna: she is Tenure-Track Assistant Professor at the Department of Philosophy and Vice-Director of the postgraduate program "Philosophical Practice" (which she initiated in 2013) at the Postgraduate Center. Her main publications so far have been in the field of (History of) Philosophy of Science: she has published on the philosophy of probability and statistics, on the Vienna Circle and on the issue of scientific determinism. Her book Dem wissenschaftlichen Determinismus auf der Spur (Karl Alber, 2019) was awarded the Karl Alber Prize 2019. Further main publications: Fare i conti con il caso. La probabilità e l'emergere dell'indeterminismo nella fisica moderna (Bologna: Gedit, 2009). "The Vienna Circle's 'Scientific World Conception': Philosophy of Science in the Political Arena", in: HOPOS. The Journal of the International Society for the History of Philosophy of Science, Chicago: University of Chicago Press, Vol. 2, No. 2; Fall 2012.

Monika Wulz is a philosopher and historian of science. After finishing her PhD at the University of Vienna, she was a postdoc researcher at the Max Planck Institute for the History of Science, at the Technical University of Braunschweig, at the University of Konstanz, and at ETH Zurich. Currently, she is a postdoc researcher and lecturer at the Chair of Science Studies at the University of Lucerne. Her research is situated at the intersection of Philosophy of Science, History of Science, and the history of social and economic thought. Her publications focus on the epistemological traditions in French philosophy, including her book Erkenntnisagenten: Gaston Bachelard und die Reorganisation des Wissens (Kadmos, 2010), on the philosophy of Ernst Mach and the Vienna Circle as well as on social and economic aspects of epistemology. Currently, she is working on a book project on the economic foundations of intellectual work in the decades around 1900.

Elisabeth Nemeth has been Professor of Philosophy at the University of Vienna (retired in 2016). Her fields of research are Philosophy and History of Science, Logical Empiricism, Philosophy of the Social Sciences. She was visiting professor at the Université Paris 1 - Sorbonne and the University of Tunis. She served as a board member in various international philosophical societies (Institute Vienna Circle, HOPOS, Austrian Philosophical Society). 2019-2021 she was president of the Austrian Ludwig Wittgenstein Society. Publications include "Ernst Mach and Logical Empiricism". In: The Routledge Companion to Logical Empiricism. Ed. by T. E. Uebel and C. Limbeck-Lilienau, Routledge, forthcoming. "Visualizing Relations in Society and Economics: Otto Neurath's Isotype-Method Against the Background of his Economic Thought". In: Neurath Reconsidered. New Sources and perspectives. Ed. by J. Cat, A. T. Tuboly. Springer Nature Switzerland 2019, 177-140. "Edgar Zilsel on Historical Laws", in: History of Explanation, Prediction and Confirmation. Proceedings of the ESF project Philosophy of Science in a European Perspective. Ed. by D. Dieks, W.J. Gonzalez, S. Hartmann, T. Uebel, M. Weber, Springer, 521-532.