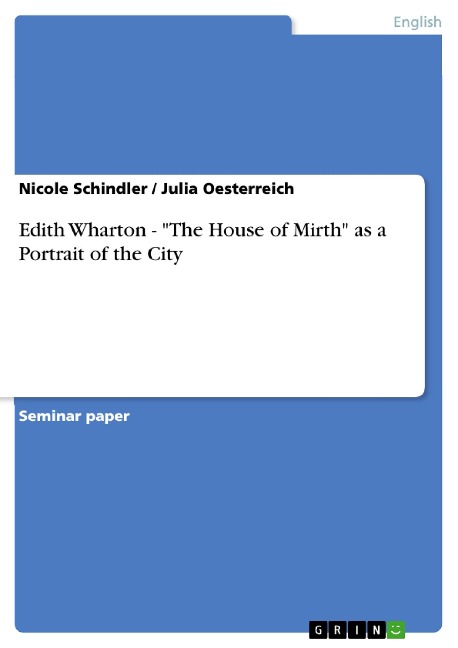 Seminar paper from the year 2005 in the subject American Studies - Literature, grade: 1,0, University of Potsdam (Anglistik / Amerikanistik), course: HS: Zwischen 'White City' und 'Slum Fiction' - Die Großstadt in der amerikanischen Literatur am Ende des 19. Jahrhunderts, language: English, abstract: In this paper we will describe the ambivalent relationship between American novelist Edith Wharton and the American city. Wharton is concerned with the lives of a rather closed set of people, namely the so called "old families" of New York. In Wharton's works, the world of the working poor is an invisible one. Although employees, servants, and maids were constantly present in and around the houses of the so called leisure class, they do not gain an independent voice, their struggle is being left untold. Wharton is interested in how the people she understood best, the families who inhabited society's highest valued spots, managed their situation. Edith Wharton's view of the architectural status quo and the newest developments in her city has to be called ambiguous. She relished the Beaux Art architecture of grandeur and at the same time she despised everything that screamed newly-rich to her. Anti-Semitism is a topic in this paper, because it became a component of New York's bourgeois identity as wealthy Jewish families were perceived to present a challenge to this high status group.
Questions we were, amongst others, concerned with are: What effect had the modern city life on the best established class? How were the customs and modalities of these people affected by the tremendous developments around them? And how did (gendered) individuals react to the entrance wish of the newly rich into their inner circles? In other words, the way in which in- and exclusion from a certain group worked, how these were executed and what the potentiality of a change in status meant for the mind of the involved characters is Edith Wharton's central concern.