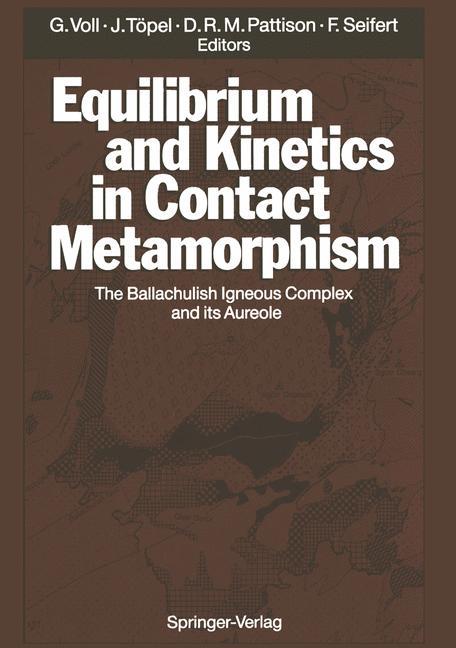 The Ballachulish Igneous Complex and Its Aureole

With the new global tectonics approach in the Earth Sciences, the quan­ titative aspects of the dynamics of rock-forming processes came into focus: geologists are no longer satisfied knowing the pressure-tempera­ ture conditions of the formation of a metamorphic rock or of the emplace­ ment of a magmatic body, but instead would like to learn the time history of these rocks as well, i. e. , derive the temperature-pressure-time path and relate it to a tectonic process. To achieve this goal, a knowledge of both pressure-temperature-dependent equilibria and the time scales at which these equilibria may be attained are essential. However, the latter kinetic information is much more difficult to retrieve than that on equilibria: whereas equilibria are controlled by state variables, and proper laboratory experiments may be directly applied to equilibrium natural assemblages, kinetics also depends on factors other than state variables, such as grain size, dislocation density, and especially time (rate of heating, duration of annealing, rate of cooling). Extrapolation of kinetic data obtained at high temperatures on laboratory time scales to more realistic lower tempera­ tures and geological time scales are dangerous because, for example, of possible changes from an intrinsically controlled defect regime to an extrinsic one as temperature is lowered, or from an interface-controlled to a diffusion-controlled reaction mechanism.

I Introduction.- 1 The Setting of the Ballachulish Intrusive Igneous Complex in the Scottish Highlands.- 2 Regional Geology of the Ballachulish Area.- II The Intrusive Complex.- 3 Structure, Petrography and Emplacement of Plutonic Rocks.- 4 Thermal Conditions and Crystallization Sequence, as Deduced from Whole-Rock and Mineral Chemistry.- 5 Nucleation and Growth of Pyroxene in the Hypersthene Diorites.- 6 Microstructures and Thermal Behaviour of Igneous Pyroxenes.- 7 The Shape of the Intrusion Based on Geophysical Data.- III The Contact Aureole and Its Rocks.- 8 Petrography and Mineral Chemistry of Pelites.- 9 Field Relations and Petrography of Partially Melted Pelitic and Semi-Pelitic Rocks.- 10 Decarbonation Reactions in Siliceous Dolomites and Impure Limestones.- 11 Microtextures and Reaction Mechanisms of Carbonate Rocks: A Comparison Between the Thermoaureoles of Ballachulish and Monzoni (N. Italy).- 12 Quartz Grain Coarsening by Collective Crystallization in Contact Quartzites.- 13 Disordering, Re-Ordering and Unmixing in Alkali Feldspars from Contact-Metamorphosed Quartzites.- 14 A Search for Variations in the Structural States of Cordierite in Contact-Metamorphosed Pelites.- 15 Detrital Quartz and K-Feldspar in Quartzites as Indicators of Oxygen Isotope Exchange Kinetics.- IV Interactions Between the Intrusion and the Contact Aureole.- 16 P-T-a(H2O) Conditions in the Thermal Aureole.- 17 Stable Isotope Geochemistry on the Intrusive Complex and Its Metamorphic Aureole.- 18 Thermal Models of Cooling.- V Concluding Discussion.- 19 Evidence of Fluid Phase Behaviour and Controls in the Intrusive Complex and Its Aureole.- 20 Intracrystalline Processes.- 21 Summary and Outlook.- References.