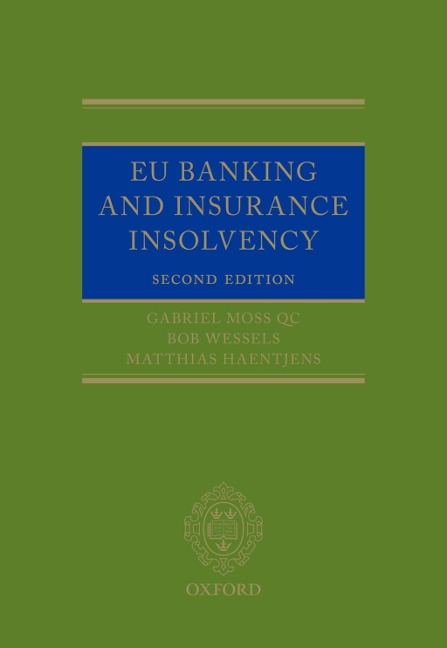 Following the chaotic effects of the global financial crisis on European financial markets, the legislative regime introduced by the European Union (EU) represents a dramatic new approach to bank insolvency law, and will have a profound effect on the way banks function. The second edition of EU Banking and Insurance Insolvency evaluates these important developments and their implications for the Eurozone countries. A comprehensive general introduction sets out the EU
insolvency law framework and the principles which govern financial institutions.

The book provides detailed commentary on the Bank Recovery and Resolution Directive (BRRD) and Single Resolution Mechanism Regulation (SRMR), the legislative instruments central to the EU's response to the crisis, intended to harmonize Member States law. It considers the new powers given to government authorities under the BRRD to write down shares and debt instruments issued by banks, and the function of the newly created 'Single Resolution Board'. Commentary on the Winding-Up Directive
(2001/24/EC) and the Insurance Insolvency Directive (2001/17/EC) discusses the significant changes these statutes have undergone as a consequence of the adoption of the BRRD and SRMR, as well as several high-profile court cases decided on the interpretation of these two statutes, including the Landsbanki
and Kaupthing cases, and the Lehman Brothers, Isis Investments, and Heritable Bank cases.

This is an invaluable practitioner guide to the new European banking insolvency regime, written by experts in the field.

Gabriel Moss QC is a barrister in private practice at South Square Chambers. He serves part-time as a deputy High Court judge of the Chancery Division and is a part-time Visiting Professor in Corporate Insolvency Law at Oxford University.

Bob Wessels is an independent legal counsel, advisor and arbitrator with over 40 years of experience. He was a law professor for over 25 years (Professor of International Insolvency Law, University of Leiden 2007-2014; Professor of Civil and Commercial Law, Vrije University Amsterdam 1988-2008), and retired in 2014.

Matthias Haentjens is Professor of Financial Law at Leiden Law School, University of Leiden. Prior to joining Leiden Law School, he was an attorney with De Brauw Blackstone Westbroek. In  this capacity, he handled cases both as a transaction lawyer and as a (supreme court) litigator.