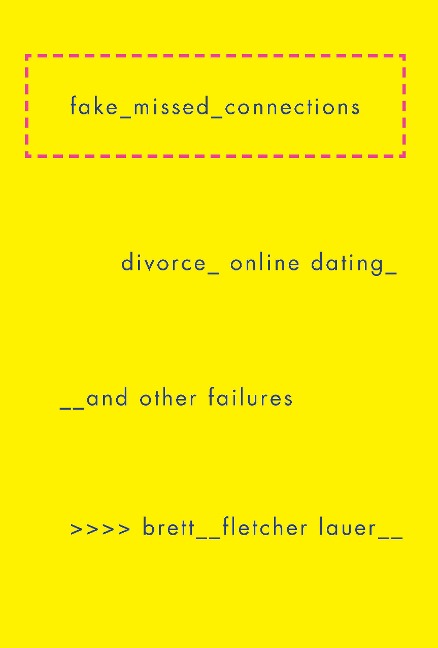 Your wife is having an affair with my husband. It has caused some trouble in my marriage and I thought you should know.

One phone call in December 2005 begins the compelling, unpredictable story of Fake Missed Connections. A child of divorce with an already fragile sense of trust, Lauer unravels at the betrayal, begins divorce proceedings, and moves back to Brooklyn where he spends too much time alone, fixated on the idea that a murderer from 1898 might be haunting his apartment. Eventually, as he starts to peruse online dating profiles, he becomes obsessed with "missed connections” precisely because they provide what online dating doesn't: a story.

He begins writing phony missed connections to post on Craigslist and, though he feels a stab of guilt when he posts them, he is hopelessly intrigued by the responses he receives. Real documents illuminate Brett's dating adventures, from love (and hate) letters and instant message conversations to Brett's online dating profile and wedding announcement. Fake Missed Connections is an unconventional yet deeply moving look at the modern search for love, the ways in which we fail to communicate, and the quest for a genuine moment of connection.
E-Book 01/2016

Brett Fletcher Lauer is the deputy director of the Poetry Society of America and the poetry editor of A Public Space. His debut collection of poems, A Hotel in Belgium, was name a Top 40 Book of 2014 by Coldfront Magainze. He is the co-founder of Ships That Pass, an online art project of fake missed connections written by notables like Lena Dunham, Emma Straub, and Paul Legault, among others. The L Magazine named him one of five Brooklyn writers to watch. He is the Poetry co-chair for the Brooklyn Book Festival and lives in Brooklyn.