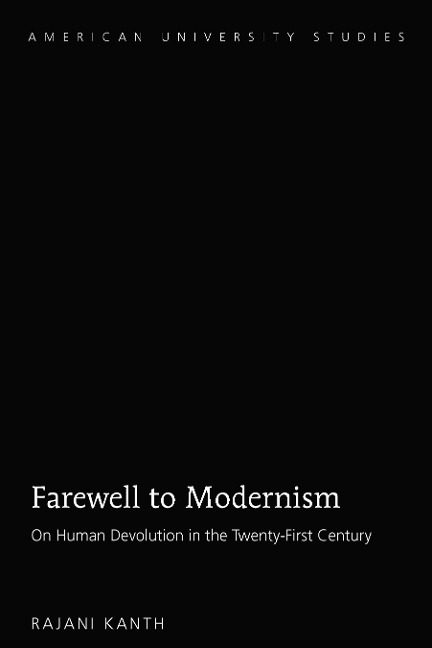 On Human Devolution in the Twenty-First Century

Farewell to Modernism: On Human Devolution in the Twenty-First Century is an original, pathbreaking, revolutionary, and totalizing critique of received Modernist ideas, including Modernist Utopianism. In that vein, it unseats virtually every dearly held myth of EuroModernist discourse. It offers a new episteme based on our true ontic nature - our anthropic species-being - as an offset and correction to all brands of EuroModernist idylls, be they of Left or Right, that have repeatedly brought the world to the brink of annihilation. In sum, this book argues that neither philosophy nor social science are tenable without a true, realist anthropology of the human species that sets limits to both political idealism and social engineering.

Professor Rajani Kanth is an economist, a philosopher, and a social thinker. His major research interests lie in the fields of political economy, social theory and policy, and women's issues. Over the course of three-plus decades, he has taught in the areas of anthropology, sociology, political science, history, economics, and philosophy. Currently based at Harvard University, he has served as an advisor to the United Nations in New York and on the faculties of prestigious universities around the world. His most recent book is The Post-Human Society (2015).

Acknowledgments - Preface: Change - Foreword by Dr. Amit Goswami - Introduction: Challenging Eurocentrism: 45 Theses - Today - The Root Cause - Crisis, Disaster, Catastrophe: Up the Down Escalator - Anatomy of a Crisis - Where We Are - More Endgames - Free Markets - Les Folies Tragiques: The Droll Schoolgirl's Guide to the World as It Is Today - The Bail-In - On Economics - On Capitalism (and Latter-day Debacles) - On Singaporeanisation: Or, Some Bitter Fruits of Globalization - Anthropic Dualism: A Tale of Two (Sub)-Species-A Comment on 'La Condition Humaine' - Querying the Cosmos - The (Sub)Human Condition - Nostalgia, for the Future - A God That Failed? - The Knowledge Game - Toward Non-Centrism - The Bell of Atri - Rites of Passage - The Last Train - A World on the Wane: The Wherefore and the Why - Endgame? - The Eclipse - On Civilization - On Philosophy - Beyond Late Modernism - A Farewell - Rethinking 'Democracy' - East and West - And There Was Blight: Summary Notes on the European Saga - By Ideals Alone? - A Summing Up - The Future? - The Final Hour - Everything, Reconsidered - The Cosmos - The Day After - Eurocentrism 101: A Primer - Toward Dissolution - Eurocentrism and EuroModernism - Racism: A Personal Discursus - Explaining a Critique: (Euro)Modernism: Delusions, Debacles, and Defaults - Ancient Vedic Wisdom: Key Concepts - Postface: Beyond Eurocentrism: The Next Frontier - Bibliography - Index.