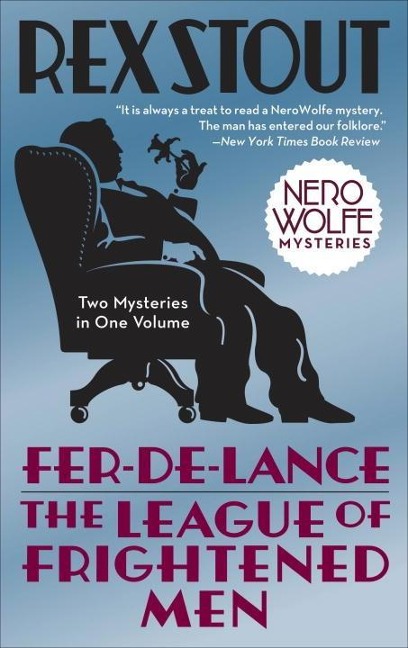 A grand master of the form, Rex Stout is one of America's greatest mystery writers, and his literary creation Nero Wolfe is one of fiction's greatest detectives. Here, in Stout's first two complete Wolfe mysteries, the arrogant, gourmandizing, sedentary sleuth and his trusty man-about-town Archie Goodwin solve their most baffling cases.

Fer-de-lance
The fer-de-lance is among the most deadly snakes known to man. When someone makes a present of one to Nero Wolfe, his partner, Archie Goodwin, suspects it means Wolfe is getting close to solving the devilishly clever murders of an immigrant and a college president. But this is a case with more twists than an angry rattler...and if Wolfe doesn't handle it with extreme care, he'll be the next one struck by a killer with poison in his heart.

The League of Frightened Men
Paul Chapin's Harvard cronies never forgave themselves for the hazing prank that left their friend a cripple. Yet they believed that Paul himself had forgiven them—until a class reunion ends in death and a series of poems promising more of the same. Now this league of frightened men is desperate for Nero Wolfe's help. But can even the great detective outwit a killer smart enough to commit an unseen murder...in plain sight?

Rex Stout, born 1886 in Indiana/USA, worked at thirty different professions until he earned enough money to travel. In 1932, he began to write thrillers focusing on the famous detective Nero Wolfe. Nero is a gourmet weighing more than a hundred kilos, and moving as little as possible. Rex Stout finished more than fifty novels and received the "Grand Masters Award". He died 1975.