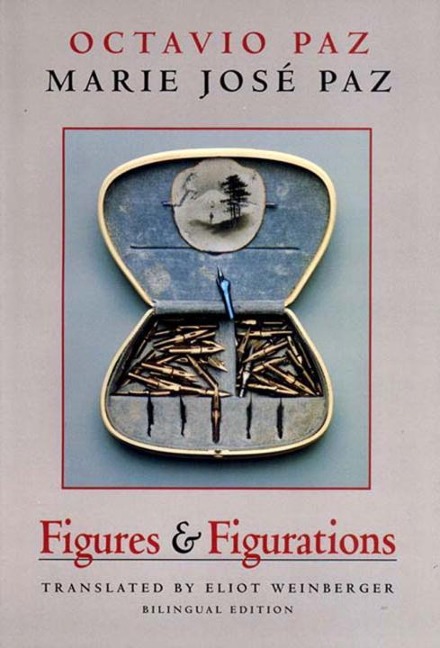 A beautiful collaboration between husband and wife. His poems to her collages, call and response from Mexico's greatest poet. "Marie Jose's constructions and boxes are three-dimensional objects transfigured by her imagination and her sensibility into visual ideas, mental enigmas, bearers of bizarre and disturbing images, or of ironic perceptions. More than things to be seen, they are wings for traveling, sails for wandering and wondering, mirrors through which to cross." Octavio Paz Figures & Figurations, one of the last books completed by the late Mexican poet Octavio Paz before his death in 1998, is a collaborative effort with his wife of thirty years, the artist Marie Jose Paz. In response to ten of her collage-constructions, he wrote ten new short poems; she in turn created two new artworks in response to two of his earlier poems. Twelve poems, twelve pieces of art reproduced in full color, in a book first published in Spanish in 1999 and now appearing in a bilingual edition. In addition to the poems and collage-constructions, Figures & Figurations includes an essay by Octavio Paz on Marie Jose Paz's work, "The Whitecaps of Time," in which he relates how her friendship with Joseph Cornell became a stimulus for her assemblages and how she was further spurred on by other friends, such as Roman Jakobson and Elizabeth Bishop. "These objects sometime surprise us," he writes, "sometimes make us laugh or dream. Signs that invite us to a motionless voyage of fantasy, bridges to the infinitely small or galactic distances, windows that open on to nowhere. The art of Marie Jose is a dialogue between here and there."

Marie José Paz began working as an artist in 1972, encouraged by artists like Joseph Cornell, Mark Strand and Robert Gardner. She was Octavio Paz's loving companion for more than thirty years.