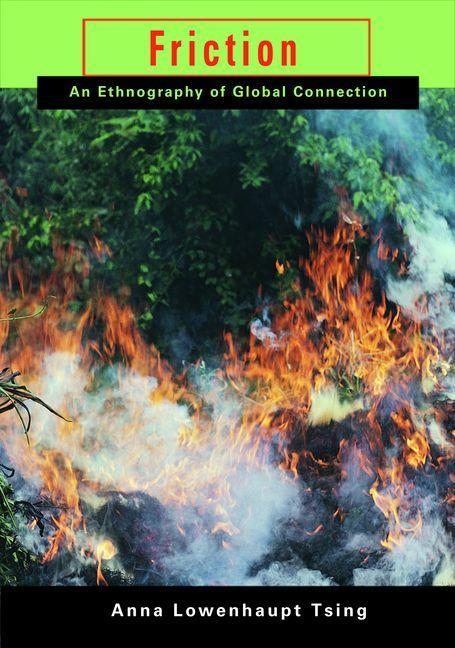 An Ethnography of Global Connection

A wheel turns because of its encounter with the surface of the road; spinning in the air it goes nowhere. Rubbing two sticks together produces heat and light; one stick alone is just a stick. In both cases, it is friction that produces movement, action, effect. Challenging the widespread view that globalization invariably signifies a "clash" of cultures, anthropologist Anna Tsing here develops friction in its place as a metaphor for the diverse and conflicting social interactions that make up our contemporary world.

She focuses on one particular "zone of awkward engagement"--the rainforests of Indonesia--where in the 1980s and the 1990s capitalist interests increasingly reshaped the landscape not so much through corporate design as through awkward chains of legal and illegal entrepreneurs that wrested the land from previous claimants, creating resources for distant markets. In response, environmental movements arose to defend the rainforests and the communities of people who live in them. Not confined to a village, a province, or a nation, the social drama of the Indonesian rainforest includes local and national environmentalists, international science, North American investors, advocates for Brazilian rubber tappers, UN funding agencies, mountaineers, village elders, and urban students, among others--all combining in unpredictable, messy misunderstandings, but misunderstandings that sometimes work out.

Providing a portfolio of methods to study global interconnections, Tsing shows how curious and creative cultural differences are in the grip of worldly encounter, and how much is overlooked in contemporary theories of the global.

"Better you had brought me a bomb, so I could
blow this place up" 21

Chapter 2: The Economy of Appearances 55

Chapter 5: A History of Weediness 171

Chapter 7: The Forest of Collaborations 245

In Love with Adam