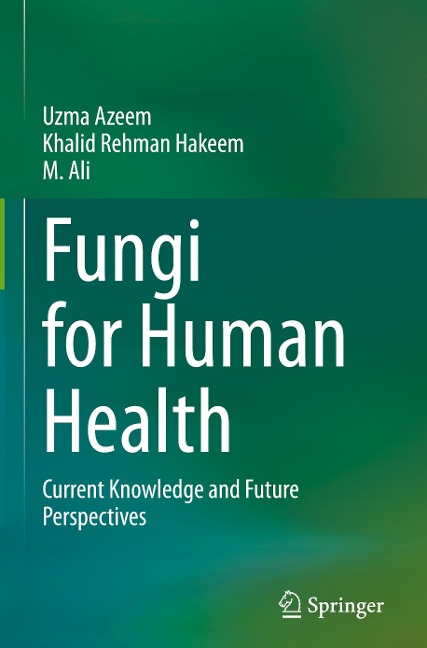 Current research lays emphasis on exploring natural products for use in nutraceuticals and pharmaceuticals to overcome various side effects of synthetic drugs. Fungi occupy an eminent position among natural sources of food and medicinal importance since ancient times. Many fungal species have been eaten as food and used in folk medicine for the treatment of many human ailments as mentioned in traditional medical literature. However, scanty information is available pertaining to the nutraceutical and pharmaceutical importance of fungi which merits an extensive review. This book spotlights the use value macrofungi in human health. Macrofungi with health benefitting properties largely belong to Basidiomycota followed by Ascomycota growing indoor (cultivated) and outdoor (wild). We endeavoured to throw light on the benefits of macrofungal taxa in relation to their food and medicinal significance in human life. We provided knowledge pertaining to the ethnomycological significance of macrofungi with respect to their uses as food and medicine by the people inhabiting different parts of the world. This book highlights the nutritional composition and bioactive compounds present in macrofungi. We also focused on the pharmacological activities of macrofungi contributing towards their medicinal value against several human disorders. We cited many commercially available nutraceutical and pharmaceutical products of macrofungal origin. This work will hopefully serve as a basic reference for general public, mycologists, researches and industry men, interested in consumption, research and marketing of macrofungi.

Dr. Uzma Azeem is a postgraduate, MPhil and doctorate from Punjabi University, Patiala, Punjab, India. She spent more than a decade here from 2006 to 2018. She has done her doctorate in Botany with specialization in Mycology and Plant Pathology in 2018. She has worked at Sri Guru Granth Sahib World University, Fatehgarh Sahib, Punjab, India as an Assistant Professor in the Department of Botany and Environmental Sciences from August 1, 2018 to January 21, 2019. She joined Sanmati Government College of Science Education and Research, Jagraon, Ludhiana, Punjab, India dated January 21, 2019. She worked here for a short period. She has been awarded with Maualana Azad National Fellowship for Minority students by University Grants Commission, New Delhi, India in the year 2011. So far she has authored 9 paper publications in peer reviewed national and international journals. She has participated and presented her research work at various conferences/symposia across India, got appreciation and won awards.

Dr. Khalid Rehman Hakeem is a Professor at King Abdulaziz University, Jeddah, Saudi Arabia. He has completed his Ph.D. (Botany) from Jamia Hamdard, New Delhi, India in 2011. Dr. Hakeem has worked as Post Doctorate Fellow in 2012 and Fellow Researcher (Associate Prof.) from 2013-2016 at Universiti Putra Malaysia, Selangor, Malaysia. His specialty is Plant Eco-Physiology, Molecular biology, Plant-Microbe-soil interactions, Medicinal plant research and Environmental Sciences and so far, has edited and authored more than 50 books with Springer International, Academic Press, etc. He has also to his credit more than 110 research publications in peer reviewed international journals, including 60 book chapters in edited volumes with international publishers. Dr Hakeem is the recipient of many national and international awards and fellowships.

Dr. M Ali is currently working under Ministry of Higher Education as a lecturer of Pharmacognosy in the department of Pharmacognosy, College of Pharmacy, Jazan University, Kingdom of Saudi Arabia (KSA). He received his Ph.D. from Jamia Hamdard University, New Delhi, India in 2012 for "Phytochemical and Pharmacological studies of an Anticancer Medicinal Plant and its Authentication using Molecular Biology Techniques". He is also recipient of Government of India, Junior research fellowship (JRF, GATE) fellowship for pursuing Masters in Pharmacy (M. Pharm) for "Enhanced Production of Vasicine and Vasicinone from callus culture of Adhatoda vasica". He has published/presented about 25 research articles in the national and international journal of repute. He has reviewed scientific papers in field of Pharmaceutical science.