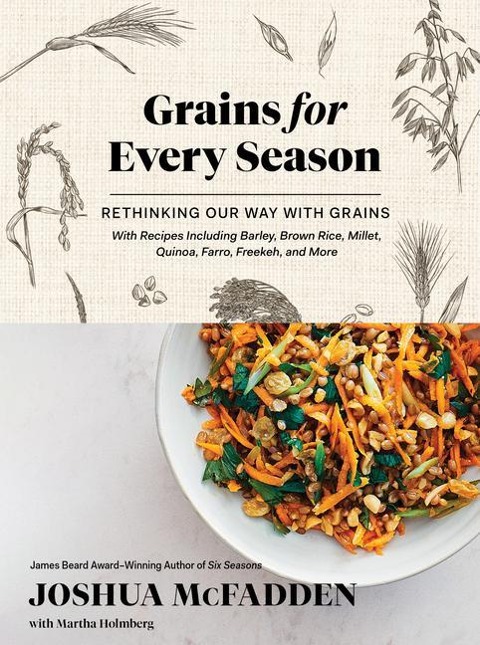 Grains for Every Season

A New Way with Whole Grains and Grain Flours

Once called a "vegetable whisperer,? Joshua McFadden is now a grain whisperer too. To follow up the smashing success of Six Seasons, with nearly 200,000 books in print and named cookbook of the year by the Wall Street Journal, The Atlantic, Bon Appétit, and USA Today, among others, McFadden gives us just as many flawless recipes to transform accessible grains into knock-your-socks off breads, pastas, and pizzas but also stir-fries, soups, and salads, and even desserts. With recipes organized into chapters by grain type and designated as gluten-free or not, readers will learn how best to prep, cook, and store the grain and then learn all the grain can do in dishes both savory and sweet, from Meatloaf with Barley and Mushrooms to Peanut Butter-Barley Cookies, from Oat Granola Bars to a super-fudgy Chocolate Oat Layer Cake with Chocolate Oat Milk Frosting, and from Beef and Swiss Chard Soup with Buckwheat to Buckwheat Cream Scones. Throughout the book there are expanded sections highlighting six seasonal variations on grain bowls, salads, rice dishes, and more, to show how flexible and satisfying cooking with grains can be. Grains for Every Season gives readers more than 200 grain-based recipes for bigger flavors, better nutrition, and incredible meals.

The Autobiography of Jean-Luc Picard

The Milky Way: An Autobiography of Our Galaxy