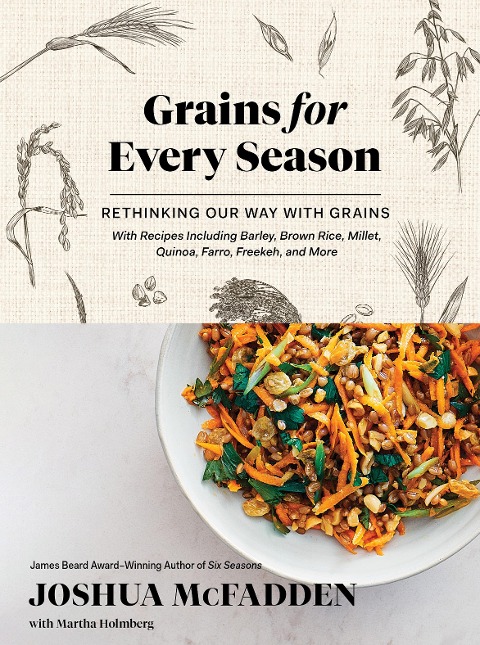 Grains for Every Season

Rethinking Our Way with Grains

James Beard Award-winning author Joshua McFadden gives grains the same considered and wide-ranging treatment he did vegetables in this much-anticipated follow-up to the mega-successful Six Seasons.

Joshua McFadden is the founder of Submarine Hospitality in Portland, Oregon. He owns and manages Ava Gene's, Cicoria, Medjool, and Tusk restaurants. In between running the restaurants, he is bringing new life to Berny Farm, a historic fifty-acre farm in Springdale, Oregon, with the goal of creating an agricultural complex that will host collaborations between farming, food, and design. His first book, Six Seasons: A New Way with Vegetables, also written with Martha Holmberg, won a James Beard Award in 2018. Follow him on Instagram at @jj__mc.
Martha Holmberg is a food writer who has authored or co-authored nine cookbooks. Modern Sauces was a James Beard Award finalist. Six Seasons: A New Way with Vegetables, written with chef Joshua McFadden, won the James Beard Award, and Grains for Every Season, also with McFadden, was a James Beard Award finalist. Holmberg was the editor in chief of Fine Cooking magazine for a decade, the food editor of The Oregonian newspaper in Portland, Oregon, and the founder of MIX magazine. She studied cooking at La Varenne in Paris, where she worked for several years as a private chef. Holmberg lives in Spokane, Washington. Follow her on Instagram @marthaholmberg.