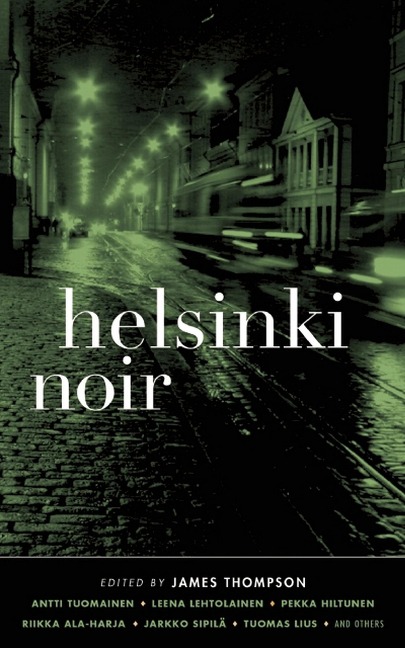 "The 14 stories in this Akashic noir anthology provide a bizarre and gruesome window into this outwardly tranquil and snow-covered city of Helsinki."-Publishers Weekly

In Akashic Books's acclaimed series of original noir anthologies, each book comprises all new stories set in a distinct neighborhood or location within the respective city. Now, the spotlight is on Finland and its southern capital of Helsinki, a city "synonymous with noir. There is a darkness in the Finnish soul, perhaps echoing the country's long winter nights, that lends itself to tales of horror and degenerate behavior" (Reviewing the Evidence).

"True fans of the macabre will enjoy some of the more disturbing tales, such as Jukka Petäjä's 'Snowy Sarcophagus,' in which the bodies of two women are discovered preserved in life-size snowmen, and Antti Tuomainen's 'The Script,' which is told from the point of view of a Finnish film and television producer who also happens to be a serial rapist . . . Readers should be prepared to keep the lights on at night after finishing this unnerving collection."-Publishers Weekly

"Every story is atmospheric . . . and every one has a neat sting at the end . . . The best and blackest in the noir series yet, and a treat for short story fans. Highly recommended."-promotingcrime.blogspot.com

James Thompson (1964-2014) lived in Finland for over fifteen years and was one of the most popular representatives of Nordic noir, with his work being published in a dozen countries. His novel Snow Angels, the first book in his acclaimed Kari Vaara series, was one of Booklist's Best Crime Novel Debuts of the Year and was nominated for Edgar, Anthony, and Strand Critics awards. Kirkus selected Lucifer's Tears, the second book in the series, as one of the best books of 2011. G.P. Putnam's Sons will release Helsinki Dead, the fifth installment in the series, in 2014. Jim was a reviewer for the New York Journal of Books and held a master's degree from the University of Helsinki. He was the editor of Helsinki Noir.