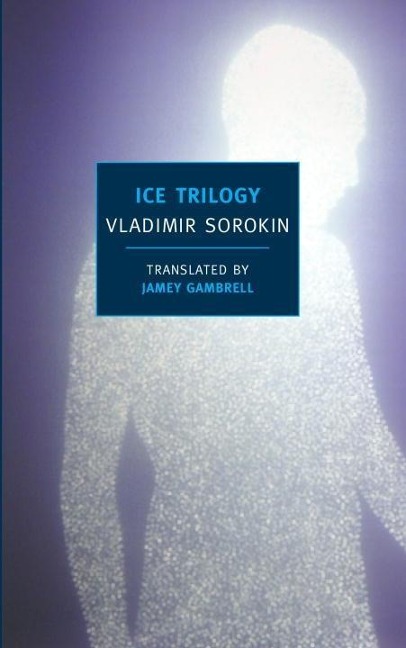 In 1908, deep in Siberia, it fell to earth. THEIR ICE. A young man on a scientific expedition found it. It spoke to his heart, and his heart named him Bro. Bro felt the Ice. Bro knew its purpose. To bring together the 23,000 blond, blue-eyed Brothers and Sisters of the Light who were scattered on earth. To wake their sleeping hearts. To return to the Light. To destroy this world. And secretly, throughout the twentieth century and up to our own day, the Children of the Light have pursued their beloved goal.

Pulp fiction, science fiction, New Ageism, pornography, video-game mayhem, old-time Communist propaganda, and rampant commercial hype all collide, splinter, and splatter in Vladimir Sorokin's virtuosic Ice Trilogy, a crazed joyride through modern times with the promise of a truly spectacular crash at the end. And the reader, as eager for the redemptive fix of a good story as the Children are for the Primordial Light, has no choice except to go along, caught up in a brilliant illusion from which only illusion escapes intact.

Vladimir Sorokin was born in a small town outside of Moscow in 1955. He trained as an engineer at the Moscow Institute of Oil and Gas, but turned to art and writing, becoming a major presence in the Moscow underground of the 1980s. His work was banned in the Soviet Union, and his first novel, The Queue, was published by the famed émigré dissident Andrei Sinyavsky in France in 1983. In 1992, Sorokin's Collected Stories was nominated for the Russian Booker Prize; in 1999, the publication of the controversial novel Blue Lard, which included a sex scene between clones of Stalin and Khrushchev, led to public demonstrations against the book and to demands that Sorokin be prosecuted as a pornographer; in 2001, he received the Andrei Biely Award for outstanding contributions to Russian literature. Sorokin is also the author of the screenplays for the moviesMoscow, The Kopeck, and 4, and of the libretto for Leonid Desyatnikov's Rosenthal's Children, the first new opera to be commissioned by the Bolshoi Theater since the 1970s. He has written numerous plays and short stories, and his work has been translated throughout the world. Among his most recent books areSugar Kremlin and Day of the Oprichnik. He lives in Moscow.

Jamey Gambrell is a writer on Russian art and culture. Her translations include Marina Tsvetaeva's Earthly Signs: Moscow Diaries, 1917-1922; a volume of Aleksandr Rodchenko's writings, Experiments for the Future; and Tatyana Tolstaya's novel, The Slynx. Her translation of Vladimir Sorokin's Day of the Oprichnik will be published in 2011.