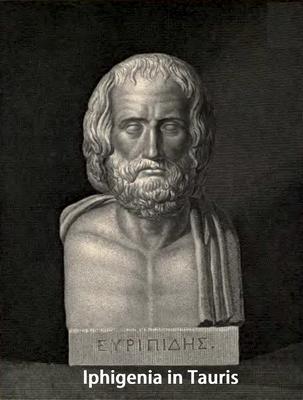 Iphigenia in Tauris is a drama by the playwright Euripides, written between 414 BC and 412 BC. It has much in common with another of Euripides's plays, Helen, as well as the lost play Andromeda, and is often described as a romance, a melodrama, a tragi-comedy or an escape play.
Euripides was a tragedian of classical Athens. Along with Aeschylus and Sophocles, he is one of the three ancient Greek tragedians for whom a significant number of plays have survived. Some ancient scholars attributed 95 plays to him but, according to the Suda, it was 92 at most.