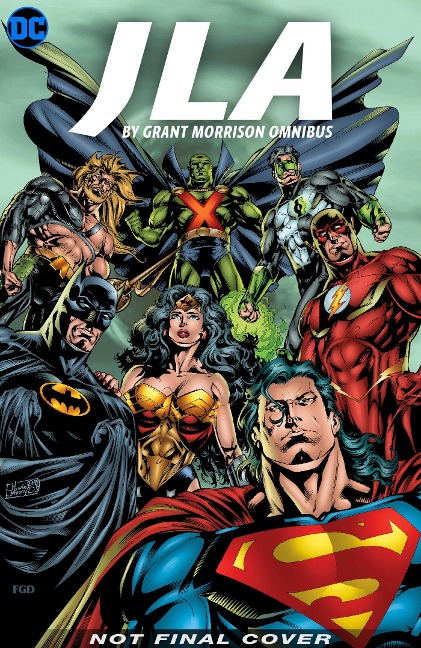 The classic Justice League of America lineup of Superman, Batman, Wonder Woman, the Flash, Green Lantern, Aquaman, and Martian Manhunter returns, but while the team members may be familiar, the stakes aren't. This is a dark new era where aliens from another world, evil masterminds, and even the old gods themselves are waiting to test the JLA's mettle. Battles will be fought, allies will be gained and lost, and the League will be pushed to its limits like never before.

THE GODS WALK AMONG US.

In a world where superhumans live side-by-side with mortals, the people of Earth can take comfort that some of these powerful beings are on the side of good. Superman, Batman, Wonder Woman, the Flash, Green Lantern, Aquaman, and Martian Manhunter are the world's first line of defense against alien invaders and supernatural entities. Time and again the JLA has rallied to save humankind from the brink of extinction. These are the adventures that have made them living legends.

Writer Grant Morrison is known for his innovative work on comics from the graphic novel Batman: Arkham Asylum to acclaimed runs on Animal Man and Doom Patrol, as well as his subversive creator-owned titles such as The Invisibles, Seaguy, and We3. Grant has written best-selling runs on JLA, Seven Soldiers of Victory, and New X-Men and helped to reinvent the DC Universe in The Multiversity, All-Star Superman, 52, Batman, Batman & Robin, and Batman Incorporated. More recently Grant has had his creator-owned series Happy! turned into a TV series on the Syfy network. He also made his return to monthly comics in 2018 with The Green Lantern.