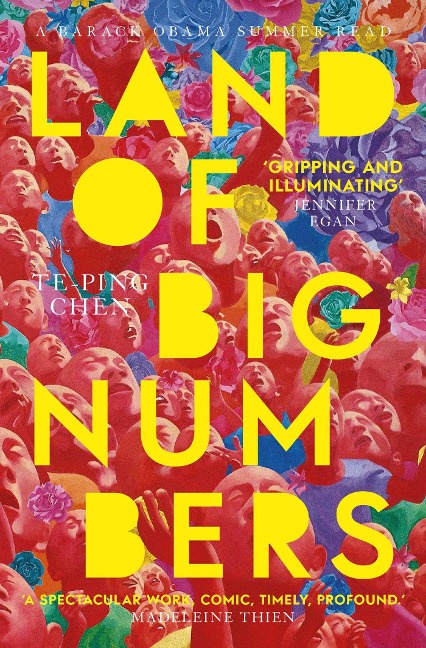 A dazzling debut collection which, deftly and urgently, tells the stories of those living in the biggest and most complicated country on earth.

'In this magnificent collection of stories, the author vividly captures the desires and losses of a richly drawn cast while drawing on the realities of contemporary China'? Cosmopolitan

A brother competes for gaming glory while his twin sister exposes the dark side of the Communist government on her underground blog; a worker at a government call centre is alarmed one day to find herself speaking to a former lover; a delicious new fruit arrives at the neighbourhood market and the locals find it starts to affect their lives in ways they could never have imagined; and a young woman's dreams of making it big in Shanghai are stalled when she finds herself working as a florist.

These are just some of the myriad lives to be evoked in The Land of Big Numbers, a collection of stories which - sometimes playfully, sometimes darkly - draws back the curtain on the realities of modern China and unveils a cast of characters as rich and complicated as any in world literature. With virtuosic brilliance, Te-ping Chen sheds light on a country much talked about but little understood and announces the birth of a bright new star in the literary firmament.

Praise for Land of Big Numbers
'A spectacular work, comic, timely, profound. Te-Ping Chen has a superb eye for detail in a China where transformation occurs simultaneously too fast and too slow for lives in pursuit of meaning in a brave new world. Her characters are achingly alive. It's rare to read a collection so satisfying, where every story adds to a gripping and intricate world.' Madeleine Thien, author of the Booker-shortlisted Do Not Say We Have Nothing

'China's borders have remained closed to foreign travellers since the first few months of the Covid pandemic, and look set to remain so in the immediate future. For those who want a peek inside the country, this very readable collection of short stories is a great place to start.' Financial Times

'Te-Ping Chen shows us how much life, loss, and quiet pleasure exists in the world, just out of view.' Alexandra Kleeman, author of You Too Can Have a Body Like Mine

TE-PING CHEN's fiction has been published, or is forthcoming from, The New Yorker, Granta, Guernica, Tin House, and BOMB. She is a Wall Street Journal journalist based in Philadelphia. From 2014-2018, she was a Beijing-based correspondent for the paper covering politics, society, and human rights. Before that, she was a Hong Kong correspondent, covering the city's politics and pro-democracy movement. Prior to joining the Journal in 2012, she spent a year in China interviewing migrant workers as a Fulbright Fellow and worked as a China reporter for the International Consortium of Investigative Journalists in DC.