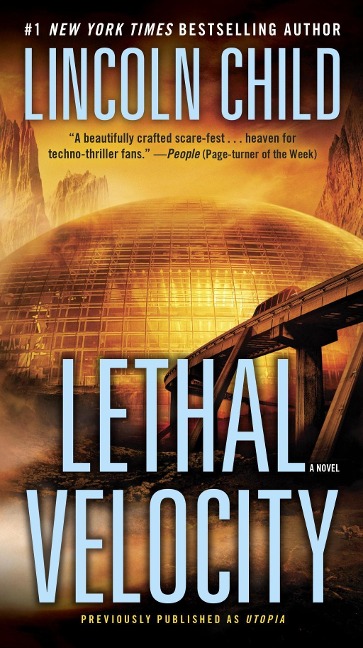 "A beautifully crafted scare-fest . . . heaven for techno-thriller fans."-People (Page-turner of the Week)

It's like nothing anyone has ever seen before. Utopia is the brand-new frontier of theme parks, a fantastic collection of Worlds each so authentic it takes the average visitor's breath away. Teeming with cutting-edge holographic and robotic technology, it has captured the nation's imagination. But it has also attracted a group of ruthless criminals. After infiltrating the park and its computer systems, their leader-calling himself John Doe-sets the parameters: If their shocking demands are met, none of the visitors to the park that day will be harmed; if not, then all hell will rain down. Dr. Andrew Warne, the brilliant engineer who designed much of the park's robotics, suddenly finds himself in a role he never imagined-trying to save the lives of thousands of innocent people . . . one of whom just happens to be his daughter.

"Terrific . . . a sensational piece of popular entertainment . . . [Lincoln] Child has created a fictional wonderland that is both high-tech and nostalgic. . . . If you are looking for intelligent fun, it doesn't get much better than this."-The Washington Post Book World

"[A] whiz-bang plot . . . springs to life from the opening pages . . . Child does an outstanding job of depicting the workings of this fantastic playground."-San Francisco Chronicle

Lincoln Child is the author of Death Match, Deep Storm, Terminal Freeze, The Third Gate, and The Forgotten Room, as well as co-author, with Douglas Preston, of numerous New York Times bestsellers, including Blue Labyrinth, White Fire, Cold Vengeance, and Relic. He lives with his wife and daughter in Morristown, New Jersey.