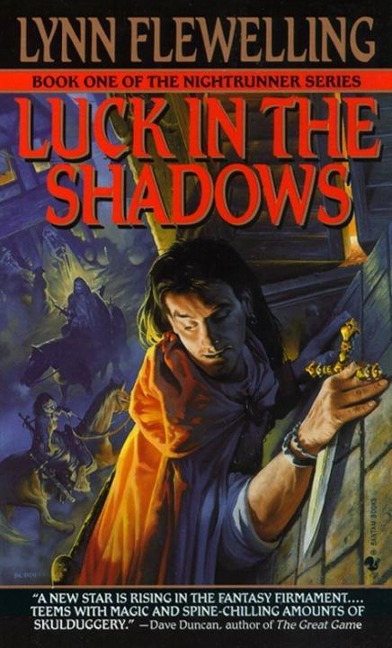 Luck in the Shadows

The Nightrunner Series, Book I

"A new star is rising in the fantasy firmament...teems with magic and spine-chilling amounts of skullduggery."-Dave Duncan, author of The Great Game

When young Alec of Kerry is taken prisoner for a crime he didn't commit, he is certain that his life is at an end.  But one thing he never expected was his cellmate.  Spy, rogue, thief, and noble, Seregil of Rhiminee is many things-none of them predictable.  And when he offers to take on Alec as his apprentice, things may never be the same for either of them.  Soon Alec is traveling roads he never knew existed, toward a war he never suspected was brewing.  Before long he and Seregil are embroiled in a sinister plot that runs deeper than either can imagine, and that may cost them far more than their lives if they fail.  But fortune is as unpredictable as Alec's new mentor, and this time there just might be...Luck in the Shadows.

Lynn Flewelling grew up in Presque Isle, Maine.  Since receiving a degree in English from the University of Maine in 1981, she has studied veternary medicine at Oregon State, classical Greek at Georgetown University, and worked as a personnel generalist, landlord, teacher, necropsy technician, advertising copywriter, and freelance journalist, more or less in that order.  She currently lives in western New York.

Cast In Shadow (The Chronicles of Elantra, Book 1)

Child of the Prophecy (The Sevenwaters Trilogy,...

Daughter of the Forest (The Sevenwaters Trilogy...

Lord of the Fading Lands