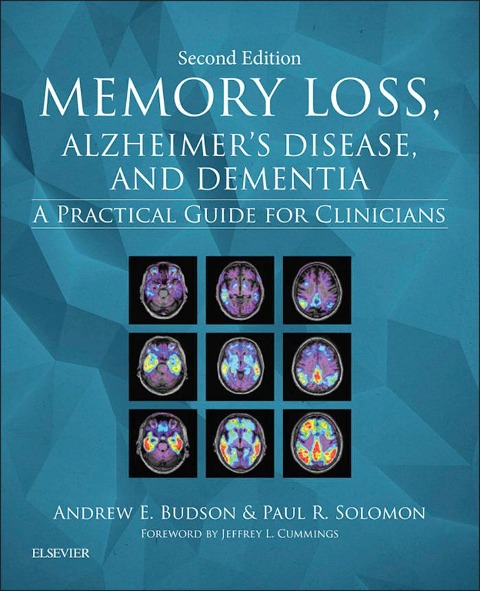 A Practical Guide for Clinicians

Now presented in full color, this updated edition of Memory Loss, Alzheimer's Disease, and Dementia is designed as a practical guide for clinicians that delivers the latest treatment approaches and research findings for dementia and related illnesses. Drs. Budson and Solomon - both key leaders in the field - cover the essentials of physical and cognitive examinations and laboratory and imaging studies, giving you the tools you need to consistently make accurate diagnoses in this rapidly growing area.

Andrew E. Budson, M.D. is Chief of Cognitive & Behavioral Neurology, Associate Chief of Staff for Education, and Director of the Center for Translational Cognitive Neuroscience at the Veterans Affairs (VA) Boston Healthcare System, Associate Director for Research at the Boston University Alzheimer's Disease Center, Professor of Neurology at Boston University School of Medicine, and Lecturer in Neurology at Harvard Medical School. He is also the Medical Director of the Boston Center for Memory, located in Newton, Massachusetts. His training included graduating cum laude from Harvard Medical School, being chief resident of the Harvard-Longwood Neurology Residency Program, pursuing a fellowship in dementia at Brigham and Women's Hospital, and studying memory as a post-doctoral fellow in experimental psychology and cognitive neuroscience at Harvard University. Dr. Budson has had government research funding since 1998, receiving a National Research Service Award and a Career Development Award in addition to a Research Project (R01) grant. He has given over 425 local, national, and international grand rounds and other academic talks. He has published over 100 papers, reviews, and book chapters and is a reviewer for more than 40 journals. He has co-authored or edited five books, including Memory Loss, Alzheimer's Disease, and Dementia: A Practical Guide for Clinicians, the second edition of which has been translated into Spanish, Portuguese, and Japanese. He was awarded the Norman Geschwind Prize in Behavioral Neurology in 2008 and the Research Award in Geriatric Neurology in 2009, both from the American Academy of Neurology. His current research uses the techniques of experimental psychology and cognitive neuroscience to understand memory in patients with Alzheimer's disease. In his memory disorders clinic at the VA Boston Healthcare System he treats patients while teaching fellows, residents, and medical students. He also sees patients in Newton at the Boston Center for Memory

SECTION I: EVALUATING THE PATIENT WITH MEMORY LOSS

1. Why Diagnose and Treat Memory Loss, Alzheimer's Disease, and Dementia?

2. Evaluating the Patient with Memory Loss or Dementia

3. Approach to the Patient with Memory Loss, Mild Cognitive Impairment, or Dementia

14. Other Disorders That Disrupt Memory

15. Goals of Treatment of Memory Loss, Alzheimer's Disease, and Dementia

21. Evaluating the Behavioral and Psychological Symptoms of Dementia

22. Caring For and Educating the Caregiver

23. Non-Pharmacological Treatment of the Behavioral and Psychological Symptoms of Dementia

24. Pharmacological Treatment of the Behavioral and Psychological Symptoms of Dementia

APPENDIX B: Screening for Memory Loss