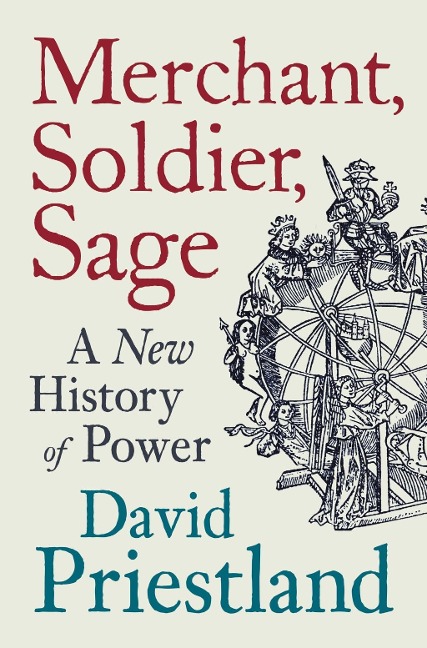 A New History of Power

From historian David Priestland, Merchant, Soldier, Sage is a remarkable book that proposes a radical new approach to how we see our world, and who runs it, in the vein of Francis Fukuyama's The End of History

We live in an age ruled by merchants. Competition, flexibility and profit are still the common currency, even at a time when Western countries have been driven off a cliff by these very values. But will it always be this way?

David Priestland argues for the predominance in any society of one of three broad value systems - that of the merchant (commercial and competitive); the soldier (aristocratic and militaristic); and the sage (bureaucratic or creative). These 'castes' struggle alongside the worker (egalitarian and artisanal) for power, and when they achieve supremacy, they can have such a strong hold over us that it is almost impossible to imagine life outside their grip. And yet there does come a point of drastic change, usually because one caste becomes too dominant. The result is economic crisis, war or revolution, and eventually a new caste takes over.

Priestland argues, we are now in the midst of a period with all the classic signs of imminent change. As the history of the last century shows, there is good reason to be fearful of the forces that this failure may unleash. Merchant, Soldier, Sage is both a masterful dissection of our current predicament and a brilliant piece of history. The world will not look the same again.

'We have here a gripping, argument-led history, efforlessly moving between New York, Tokyo and Berlin, from the Reformation to the 2008 economic crisis ... dazzling ... here, at last, is a work that places the current crisis in a longer history of seismic shifts in the balance of social power' Frank Trentman, BBC History Magazine

'Concise but extremely ambitious ... well worth pondering and reflecting on ... among the many contributions to the dissection of our current predicament, this is surely one of the most thought-provoking' Sir Richard J Evans, Guardian

David Priestland has studied Communism in all its forms for many years, in both Oxford and Moscow State Universities. He is University Lecturer in Modern History at Oxford and a Fellow of St. Edmund Hall, and the author of Stalinism and the Politics of Mobilization. The Red Flag was shortlisted for the Longman/History Today prize.