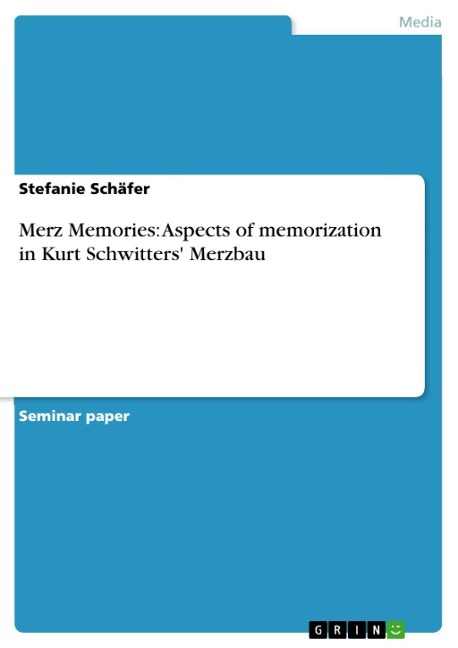 Seminar paper from the year 2011 in the subject Art - Miscellaneous, grade: 1,2, University of Toronto (Fine Arts), course: Dada and Neo Dada, language: English, abstract: This paper will deal with his most popular and probably biggest work, the Hannover Merzbau. In about 1920, he began constructing the Merzbau, a combination of collage, sculpture and architecture, which emerged in a corner of his studio and eventually took over many parts of the house in Hannover. Schwitters slowly turned his Merz-works into a sculptural architectonic space that widened to almost all the rooms of the house and even the cellar and the balcony. This was the time, when he first called his whole art Merz, in order to separate it from anything else and to form a new idea of art.
The Merzbau was a complex formation of requisites linked to his bibliography but also to the contemporary world affairs as well as to German history, artists and thinkers, he considered to be worth getting a little memorial. A majority of the souvenir collection formed little niches, dedicated to his friends.
The Merzbau was a very intimate and private construction. It had to be very bound to himself and his memories, because he actually lived there. The construction is often described as "grottoesque", impressive and full of little souvenirs. Over the years it was always changing and shifting, the different names that Schwitters gave it are very often mixed up with mere elements of the Merzbau but only because he himself never made clear which name referred to which piece.
This essay is primarily concerned with a deeper investigation of the various aspects of memory within the Merzbau, than has been made hitherto. It wants to point at the different concepts of memory, incorporated in Merz.
Furthermore, I want to point to the several important concepts of memory, one can relate to the Merzbau, which are either produced by the construction itself or by people that deal with it.
In this paper will be argued that even the absence of the Merzbau creates memory. The Hannover Sprengel Museum did a recreation of the Merzbau; but how much of it is fiction? The Merzbau has always been exposed to the wildest speculations. There also happened a number of translation errors and the reports are highly contradictory, which probably has increased the emergence of legends. Thus, I will also examine how the memories and documentation of the Merzbau have had an impact on its reception.