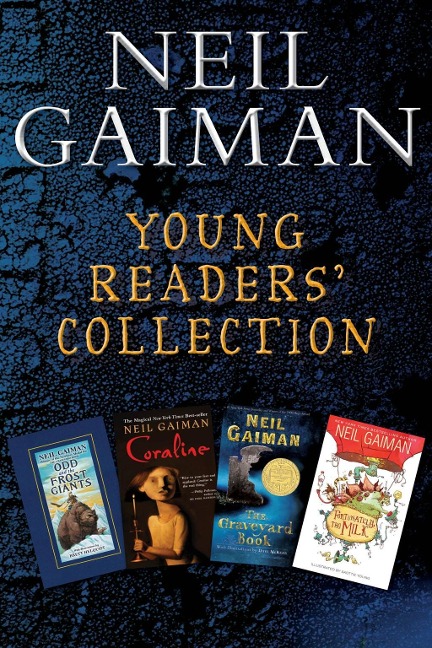 Odd and the Frost Giants; Coraline; The Graveyard Book; Fortunately, the Milk

Neil Gaiman—winner of both a Newbery and Carnegie Medal—presents four of his best-loved acclaimed novels for young readers in this collection.

Coraline: When Coraline steps through a door to find another house strangely similar to her own (only better), things seem marvelous. But there's another mother there, and another father, and they want her to stay and be their little girl. They want to change her and never let her go. Coraline will have to fight with all her wit and courage if she is to save herself and return to her ordinary life.

The Graveyard Book: Bod is an unusual boy who inhabits an unusual place—he's the only living resident of a graveyard. Raised from infancy by the ghosts, werewolves, and other cemetery denizens, Bod has learned the antiquated customs of his guardians' time as well as their ghostly teachings. But can a boy raised by ghosts face the wonders and terrors of the worlds of both the living and the dead? The Graveyard Book won the Newbery Medal and the Carnegie Medal and is a Hugo Award Winner for Best Novel.

Odd and the Frost Giants: In this inventive, short, yet perfectly formed novel inspired by traditional Norse mythology, Neil Gaiman takes readers on a wild and magical trip to the land of giants and gods and back.

Fortunately, the Milk: Find out just how odd things get in this hilarious New York Times bestselling story of time travel and breakfast cereal, expertly told by Newbery Medalist and bestselling author Neil Gaiman and illustrated by Skottie Young.

Art of Being & Becoming

Sandman Slim: Escaped from Hell, Barred from He...