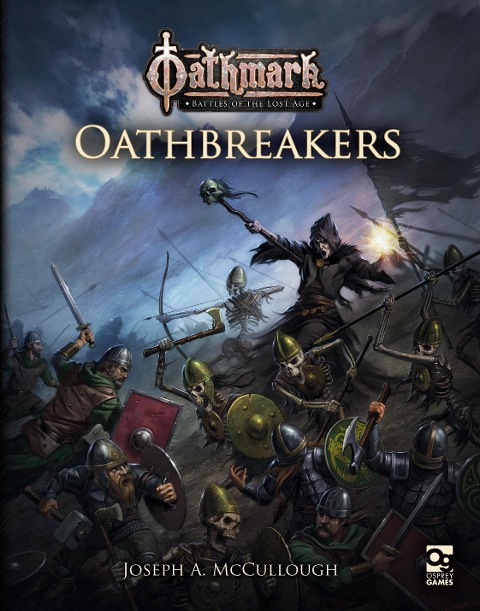 Dark necromancers have laid claim to forsaken kingdoms and summoned forth the souls of those who defiled their oathmarks. The dead, once again, march to war. As armies of wraiths and skeletal warriors bring destruction to their lands, the small kingdoms of the Marches also turn to the spirits of the dead. Gathering the most ancient and powerful of oathmarks, they recall the spectral forms of those that died in loyal battle to once again come forth in defence of their kingdoms. With these ethereal warriors joining their ranks, the kings of the Marches may yet stand.

This supplement for Oathmark: Battles of the Lost Age introduces the forces of the dead to the game. Some armies will use dark magic to summon the souls and corpses of traitors from the past, while others will recall the spirits of loyal warriors that gave their lives and willingly fight again. This book also includes expanded rules for characters, which allow you to chart their progress from battle-to-battle, and watch as they grow in rank, responsibility, and power. All of these rules are then incorporated into a campaign featuring new scenarios that together tell of an epic war for survival.

Joseph A. McCullough is the author of several non-fiction books including A Pocket History of Ireland, Zombies: A Hunter's Guide, and Dragonslayers: From Beowulf to St. George. In addition, his fantasy short stories have appeared in various books and magazines such as Black Gate, Lords of Swords, and Adventure Mystery Tales. He is also the creator of Frostgrave and Frostgrave: Ghost Archipelago, and co-wrote The Grey Mountains, a supplement for the Middle-Earth Role-Playing Game. His continued ramblings can be read at: therenaissancetroll.blogspot.co.uk