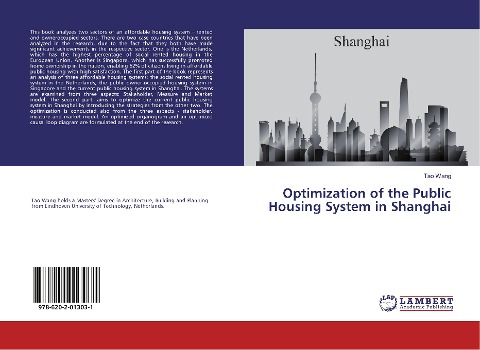 Optimization of the Public Housing System in Shanghai

This book analyzes two sectors of an affordable housing system - rented and owneroccupied sectors. There are two case countries that have been analyzed in the research, due to the fact that they both have made significant achievements in the respective sector. One is the Netherlands, which has the highest percentage of social rented housing in the European Union. Another is Singapore, which has successfully promoted home ownership in the nation, enabling 82% of citizens living in affordable public housing with high satisfaction. The first part of the book represents an analysis of three affordable housing systems: the social rented housing system in the Netherlands, the public owner-occupied housing system in Singapore and the current public housing system in Shanghai. The systems are examined from three aspects: Stakeholder, Measure and Market model. The second part, aims to optimize the current public housing system in Shanghai by introducing the strategies from the other two. The optimization is conducted also from the three aspects - stakeholder, measure and market model. An optimized organogram and an optimized causal loop diagram are formulated at the end of the research.