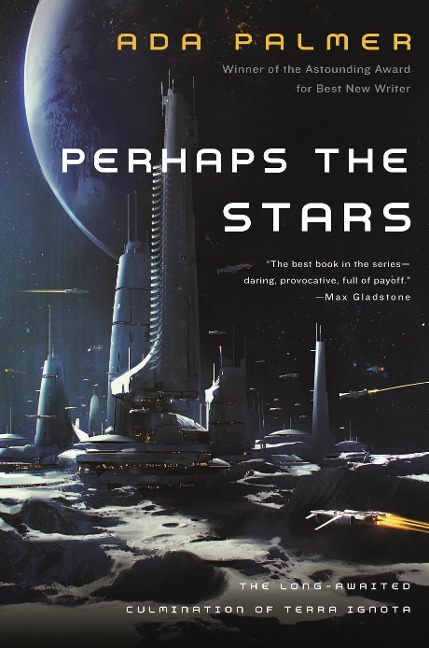 From the 2017 John W. Campbell Award Winner for Best Writer, Ada Palmer's Perhaps the Stars is the final book of the Hugo Award-shortlisted Terra Ignota series.

In the future, the leaders of Hive nations-nations without fixed location-clandestinely committed nefarious deeds in order to maintain an outward semblance of utopian stability. But the facade could only last so long. The comforts of effortless global travel and worldwide abundance may have tempered humanity's darkest inclinations, but conflict remains deeply rooted in the human psyche. All it needed was a catalyst, in form of special little boy to ignite half a millennium of repressed chaos.

Now, war spreads throughout the globe, splintering old alliances and awakening sleeping enmities. All transportation systems are in ruins, causing the tyranny of distance to fracture a long-united Earth and threaten to obliterate everything the Hive system built.

With the arch-criminal Mycroft nowhere to be found, his successor, Ninth Anonymous, must not only chronicle the discord of war, but attempt to restore order in a world spiraling closer to irreparable ruin.

The fate of a broken society hangs in the balance. Is the key to salvation to remain Earth-bound or, perhaps, to start anew throughout the far reaches of the stars?